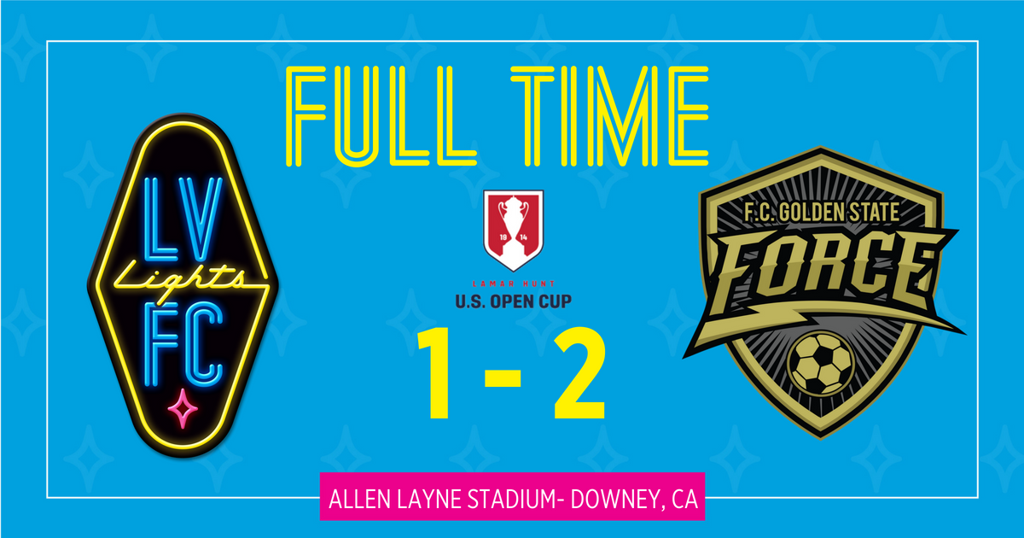 DOWNEY, Calif. – Upsets - or "Cupsets," as they're commonly referred to in the Lamar Hunt U.S. Open Cup tournament - are a big part of what makes the country's longest-running soccer competition great.

Unless you happen to be on the wrong side of one.

That's where Las Vegas Lights FC found itself on Wednesday night in Downey, Calif., as it was knocked out of the U.S. Open Cup by FC Golden State Force in third round play, 2-1, thanks to a goal scored on a penalty kick in the 90th minute of play.

The "Cupset" that Lights FC suffered came a week after seven fellow United Soccer League teams were surprisingly knocked out in second round play. As for Golden State Force, this was their second week in a row playing spoiler.

"Before we faced the game, we knew how demanding it would be," Lights FC Head Coach Isidro Sánchez said. "We faced it with professionalism and with our best available players. But we did win another very important thing - Our courage.

"The feeling we are having right now, plus the feeling of last Saturday's game, it's making this team stronger."

And playing inspired with him back in the fold, once again, the team was forced to dig deep and continue pushing despite not being able to convert its offensive opportunities in the final third of the pitch.

Last Wednesday, the Lights FC offense broke out in its 4-2 second round U.S. Open Cup victory over FC Tucson, then carried that momentum into USL play Saturday night, facing first place Real Monarchs SLC. Despite falling at home in that match, 2-0, Lights FC out-shot the visitors, 26-8, and the club put on maybe its most aggressive offensive performance of the season.

Lights FC faced a different kind of adversity in the first half against Golden State Force, as one of the team's premier defenders - Miguel Garduño - went down in the 33rd minute with an injury, forcing him to be subbed off for the first time in a match this season.

Marco Cesar Jaime Jr. stepped in in his place, and combined with captain Joel Huiqui and Juan Herrera-Perla to keep the back line strong for the better part of the night.

Lights FC had its chances, too. But just like Saturday night, the odds weren't in the team's favor.

The two nearest misses involved a 31st minute shot from 25 yards out by Christian Torres, which banged high off the right post, then a 63rd minute chance by Jaime Jr. in front of the net, which scraped the cross bar and went over the top of the goal.

The 0-0 deadlock was ultimately broken in the 75th minute, when Golden State Force's dangerous striker Allisson Faramilio drove a ball past Ricardo Ferriño - who was otherwise stellar on the night - to put the hosts up 1-0.

Playing with even more urgency after falling behind, Lights FC equalized the score quickly in the 81st minute, when Huiqui pushed in a header off a well-placed corner kick by Torres.

But bad luck struck again in the 90th minute, though, as Faramilio was granted a penalty kick following a foul call within the box. He used the opportunity to go high and left past Ferriño to create a 2-1 Golden State Force lead.

Lights FC got a couple of chances in stoppage time off of corner kicks, but couldn't find any more magic.

Golden State Force now advances to the fourth round, where it will most likely draw an even more daunting task - facing a Major League Soccer club, as 20 MLS sides enter the field on Wednesday, June 6. Fourth round match-ups will be announced on Thursday at 8 a.m. PT.

On the other side, it was a missed opportunity to face the highest level of American competition at least once more this season.

"Today, we lost an important opportunity to face an MLS team and to show what we are made of," Sánchez added. "But we recovered our courage, which I'm sure will be crucial to achieving important things in the near future."

One important achievement that is within reach on the extended road trip would be gaining three points on the USL Western Conference table Saturday night.

Lights FC (2-3-4, 10 points) will remain in Southern California until then, when it faces LA Galaxy II (1-6-4, 7 points), who fought to a 1-1 draw Wednesday night with Rio Grande Valley FC Toros in league play. That match will kick-off at 7:30 p.m., streaming nationwide on the new ESPN+ app.

After a tough stretch in league play following a hot start to its inaugural campaign, Lights FC's goal is to keep the focus high the rest of the week, and take advantage of another golden opportunity Saturday night. It's a chance to kickstart a needed run in USL play to help it emerge from the middle of the Western Conference pack.

"We are doing much better, we are improving," Sánchez said. "But at the end of the day, this is a competition where we need to win games and points. It's good to have good performances and have the feeling that the team is going the way you want, but the aim of all of this effort will always be winning.

"We will continue, with passion and intelligence, doing everything in our hands to achieve the victory. And our next opportunity is on Saturday.

GARDUÑO UPDATE: After exiting Wednesday's match in the 33rd minute, Miguel Garduño was diagnosed with a lower body injury that sets his official status as questionable for Saturday's match against Galaxy II.