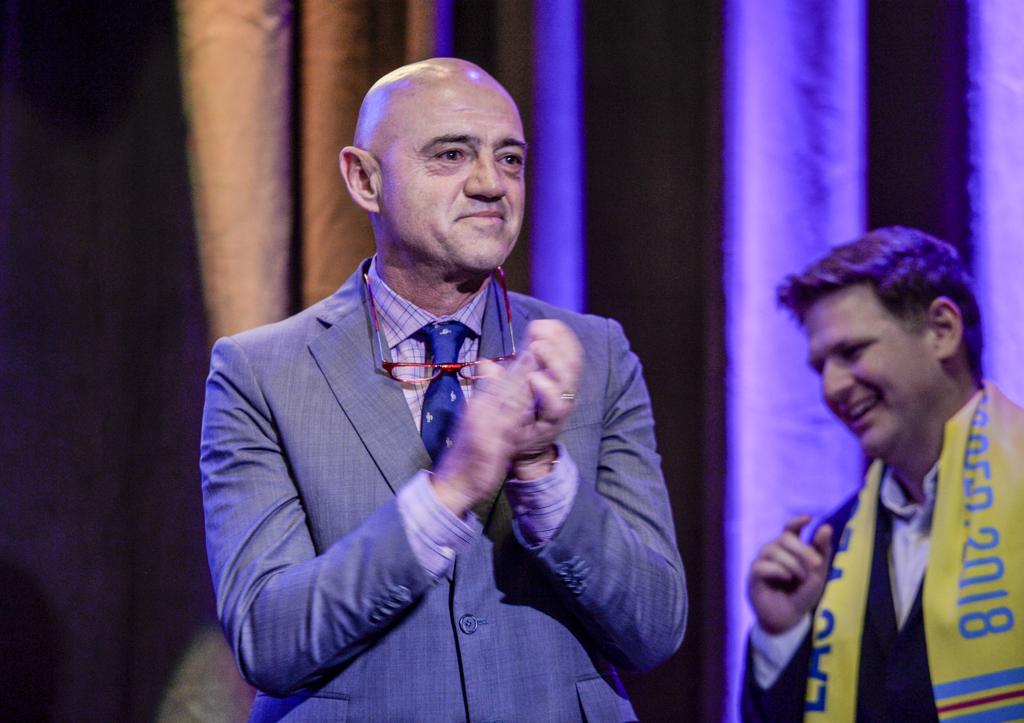 José Luis Sanchéz Solá considers Las Vegas to be the most spectacular city in the world, and now, the coach commonly referred to as ‘Chelís’ plans to lead a team to match that description.

In front of fans and the media, Chelís made his first public appearance Tuesday as head coach of Las Vegas Lights Football Club (FC) at a press conference held at Inspire Theatre in Downtown Las Vegas. The setting was mere blocks from where Chelís will build a team in the vision of both he and the club’s owner and CEO, Brett Lashbrook.

“For a spectacular city, you need spectacular soccer,” Chelís said. “I want to make sure that this team smells like Las Vegas. Players in Las Vegas do smell differently.”

The ‘smell’ Chelís wants to capture involves players who can execute a fast, attacking, high-scoring brand of soccer. It is just one way in which Lights FC is going to attempt to break the mold in the way professional soccer is presented in the United States.

“I believe teams should represent their communities,” Lashbrook said. “Las Vegas is glitzy, fast and forward. I thought about how we do this differently.

“(Chelís) is the personality. He is the entrepreneur. He is the experienced coach. We want and expect this club to be different and raise the bar of the USL and further develop American soccer.”

Before inviting everyone in attendance Tuesday afternoon to join him later in the evening for a beer (on him) in Downtown Las Vegas at the Gold Spike, Chelís doubled down on his promise to make the club truly one by, for and of Las Vegas. He announced upcoming tryouts – a combine – to take place in the second weekend of December, as he promises to scour Las Vegas for players qualified to help fill his roster.

“I look like a politician now, promising and promising, but this is very important for me,” Chelís said. “I’m really looking for players, and hope that I can find several from Las Vegas. This is a great opportunity and a very unique opportunity in professional soccer.”

Chelís’ career as a head coach began by taking over the reins with Puebla (2006-10, 2014) of the prestigious Liga MX. A coach who immediately earned the support and loyalty of his players, Chelís helped end more than a decade of dormancy for the club, including multiple deep postseason runs. His experience in Mexico also included head coaching stints with Estudiantes Tecos (2010-11), Tamaulipas (2012), Veracruz (2014) and Venados F.C. (2016-17).

His first taste of coaching in the U.S. was as the head coach of Major League Soccer (MLS) club Chivas USA in 2013.

The first official member of Chelís’s staff will be a familiar one – his son, Isidro Sánchez. The 30-year-old Sánchez played for Puebla’s Premier team from 2007-12, and was also a member of Canada’s U-20 and U-23 national teams. He began his coaching career on his father’s staff at Chivas USA in 2013, and has since held assistant coaching and scouting positions for multiple clubs in Mexico.

Chelís will begin working with Lights FC immediately, while also completing his contractual obligations with Fútbol Picante through the end of 2017.

Lights FC, the 33rd team in the USL, will begin preseason play at Cashman Field in February 2018, with a home schedule of 20-plus matches running through at least October 2018. While sharing Cashman Field during the inaugural season with the Las Vegas 51s, the stadium and playing surface will be converted to a fully natural grass playing turf to provide and intimate, authentic soccer environment for each home match.