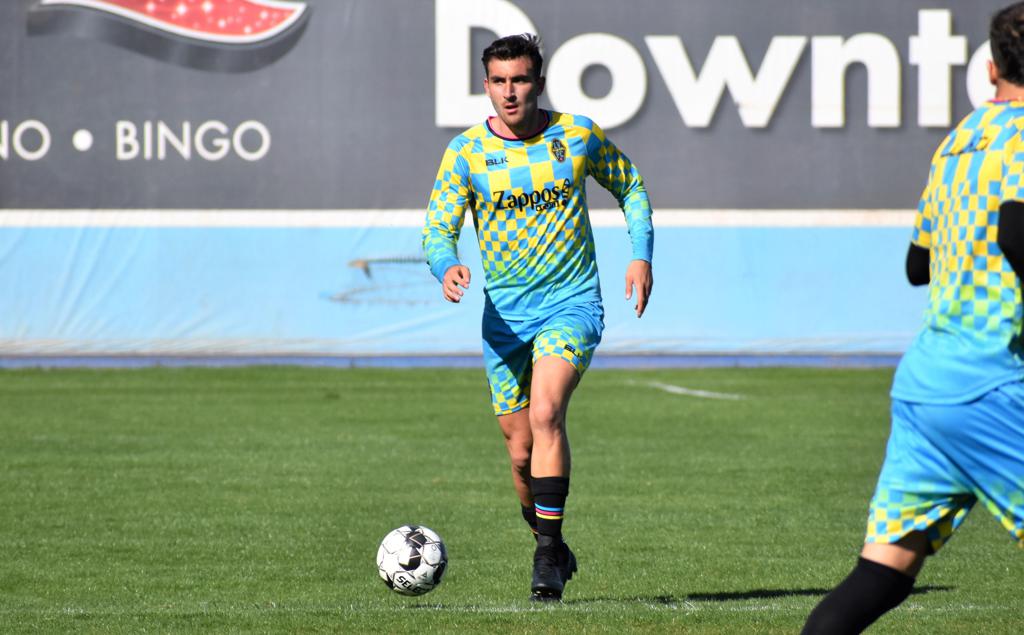 Ramon Martin Del Campo will make his Lights FC debut as the team's leader in the back-line, this coming off of his best season as a professional. In 2019 he was Fresno FC's defensive captain, leading the team to a third-place finish in USL Championship's

SAN DIEGO, CA -- The third season in Lights FC history will kick off with a marquee matchup for USL Championship between Las Vegas and expansion franchise San Diego Loyal SC, which will be nationally televised on ESPNews this Saturday night from Torero Stadium in San Diego.

"As we get closer you can feel the excitement in our group. You feel the edge that this is a week where we're working for a game with three points on the line," said Lights FC manager Eric Wynalda. "The challenge for us is to keep the guys focused regardless of the attention this game is getting for various reasons.  We have to lock in on our objective which is to play well and come home with three points.”

This match will be the first opportunity to play in an official capacity for a revamped Lights FC roster that has been bolstered with experienced players in the professional ranks that come in with a win-now mentality.

"Everyone on our squad is working hard. We're so close to our first match and everyone is trying to be a part of our lineup,” stated newcomer Ramon Martin Del Campo. "We all want to win and I want to do everything in my power to do so. That's what Eric wants — have a group of warriors that are going to battle for him and for this city.”

This match-up will pit two U.S. Men's National Team legends on the technical areas, with Eric Wynalda coaching Lights FC for a second consecutive season and Landon Donovan making his managerial debut with Loyal SC. Having these two men's teams face each other will definitely garner attention.

"There's a ton of storylines pre-game and there will certainly be more post-game. This is a good match right out of the gates for us, playing a game of this magnitude with the kind of focus it has being on national television," added Wynalda. "There's plenty of reasons to be nervous, but this group is ready. We want to win and earn the maximum three points".

San Diego Loyal SC is the lone Western Conference expansion franchise to make their debut in the 2020 USL Championship season, with United States Men's National Team leading goalscorer Landon Donovan as their head coach and executive vice-president of soccer operations. Saturday's match between San Diego and Las Vegas will be Donovan's managerial debut. His accomplishments span both his time domestically and internationally during a 19-year professional career. In total, he played for six men's professional outdoor teams covering four leagues.

Loyal SC's roster features four former Lights FC players: Carlos Alvarez, Eric Avila, and Raul Mendiola from the 2018 season, plus Irvin Raul Parra from the 2019 campaign. Mendiola (10) and Parra (15) led Las Vegas in goals scored during the seasons they played for the Lights. Alvarez was a member of the Las Vegas inaugural roster, scoring 7 goals and serving 4 assists in 2018. Meanwhile, Eric Avila was one of only seven players that played at least 22 games for the Lights that year despite being a midseason addition.

The league newcomers brought in seven players with experience in Major League Soccer, including most recently Collin Martin last season with Minnesota United, Emra Klimenta in 2018 with L.A. Galaxy, and Sal Zizzo in 2018 with Atlanta United. 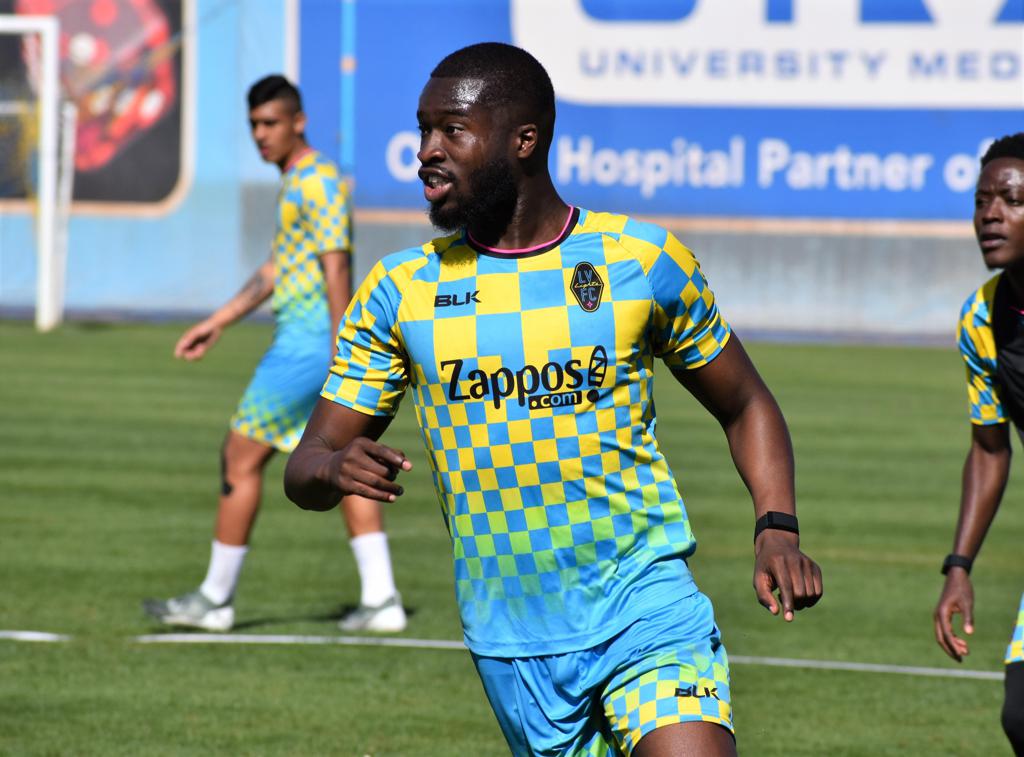 Lights FC will begin their third year as members of USL Championship's Western Conference, where they have yet to lose in their inaugural match of regular-season action.

Las Vegas added three points in the franchise's first-ever official match by defeating Fresno FC on the road 3-2 on March 17, 2018. The following year the Lights began their campaign at home by hosting Austin Bold FC on March 9, 2019, in what ended up being a scoreless draw where Vegas controlled possession of the ball and outshot their opponent.

This match will mark the return to San Diego for three members of Lights FC that consider the city their second home: Eric Wynalda, Thomas Olsen, and Ramon Martin Del Campo.

Wynalda had a standout collegiate career with San Diego State, leading its men's soccer team to the NCAA Championship game in 1987 as a freshman. Played three years for the Aztecs before becoming a professional. He was inducted to the SDSU Athletics Hall of Fame in 1996.

After being born in Mexico, Ramon Martin Del Campo and his family relocated to Chula Vista when he was two years old. He fell in love with soccer there, first watching his father play in Sunday leagues at Castle Park High School. After rooting for his father's Cobras team, the tables turned with Ramon starting his own playing career in the sport winning the C.I.F. championship with Bonita Vista High School in 2011 before moving out of the San Diego metropolitan area to attend college at UC Davis.

It was the opposite for goalkeeper Thomas Olsen, who moved out of his hometown of Las Vegas for the first time to attend the University of San Diego. After redshirting his first year in Southern California, Olsen went on to play for the Toreros the next four seasons. He finished his time in San Diego ranking top-5 in multiple categories for USD, including games started in goal, saves, wins, and shutouts.

KICKING IT OFF AGAINST EXPANSION TEAMS

This match against San Diego Loyal SC will mark the beginning of the third year for Lights FC as members of USL Championship. Las Vegas has kicked off each of their regular seasons against expansion franchises, where the Lights have yet to lose in season openers after defeating Fresno 3-2 on the road in 2018 and battling to a scoreless draw versus Austin in 2019.

Lights FC's back-line was bolstered in the offseason with the addition of Ramon Martin del Campo. The USL Championship veteran is coming off his best season as a professional soccer player, where he was the defensive leader of a Fresno FC side that clinched their first playoff berth with the third-best record in the Western Conference.

Del Campo made his USL debut in 2017 after being signed by Ottawa Fury, where he was featured in 24 matches. He then went on to make the move to the West by joining expansion team Fresno FC. He racked up over 5,500 minutes of playing time over 63 matches in his two years with the Foxes. All but two of his 87 appearances have been as part of his team’s starting lineup. As the leader of Fresno’s defense, Ramon Martin was considered one of the best center backs in USL Championship during the 2019 season.

He got his first taste of the professional level in 2015, when he signed a two-year contract with Costa Rican titans Deportivo Saprissa, being loaned out during the 2016 season to Puerto Rico FC.

The center back from Valencia, California got his first crack at becoming a professional soccer player with Lights FC. Gabe Robinson became the first player in franchise history with 33 starts in a season, finishing the season as the league leader with 183 clearances, adding 3 goals and an assist, showing his versatility as a key performer both defensively and offensively for Las Vegas. He was voted as Lights FC's Most Valuable Player by the team's fans.

Robinson’s performances in the 2019 USL Championship season has him on the radar of the National Football Federation of Guatemala for a potential National Team call up. 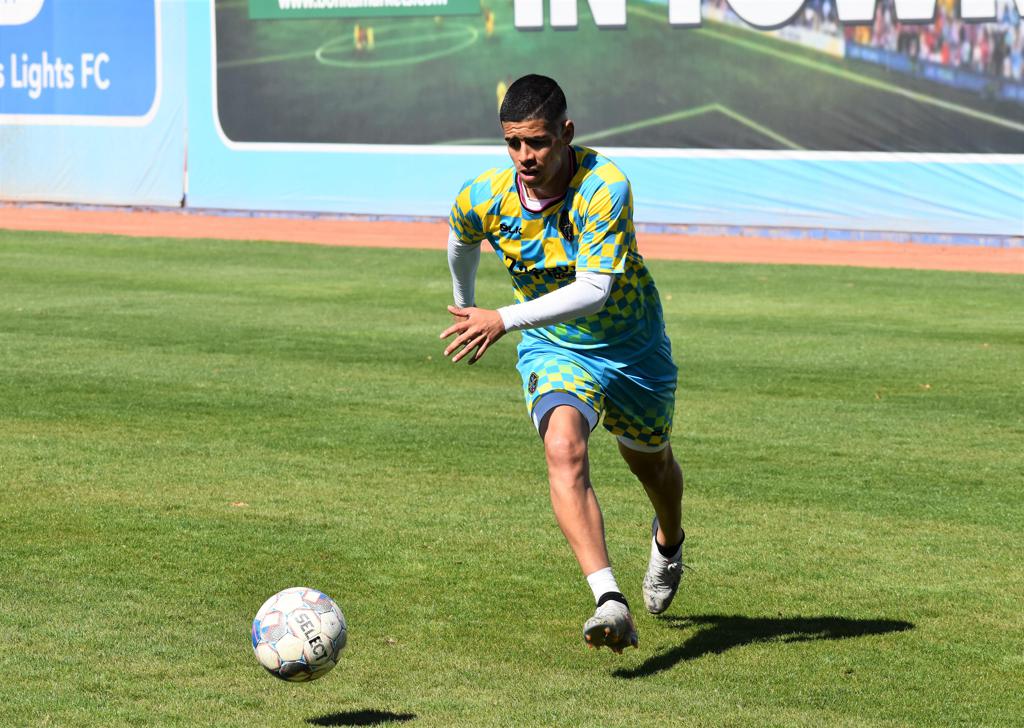 After signing this week with Lights FC, El Salvador National Team player Junior Burgos is ready to be used by Eric Wynalda in Las Vegas' midfield as an offensive play-maker.

Seku Conneh is the most experienced player out of Lights FC's African trio that also includes Yamikani Chester and Chancel Ndaye, all with caps with their respective national squads. The Liberian National Team member made his debut in the professional ranks in 2015 after being a part of several developmental academies and youth clubs, including world-famous Ajax FC.

After scoring 11 goals in 45 matches between his time with Fortuna Sittard and Oss of the Dutch Second Division (Eerste Divisie), Conneh joined USL Championship’s Bethlehem Steel in 2016, scoring 12 goals in 43 appearances for the Philadelphia Union’s USL affiliate. He split the last pair of seasons between the Ansan Greeners of the K League 2 (second division of South Korean soccer) and Vojvodina (Serbian SuperLiga - first division).

Jordan was born in London, England. He relocated with his family to Canada, where he represented the Canadian National Team system throughout their U-18, U-20, and U-23 squads. Played in the collegiate level with Syracuse University, where he had a standout career with 74 appearances over his 4 years as a part of the Orange side. He was selected with the 57th pick of the 2015 Major League Soccer SuperDraft by Real Salt Lake.

Murrell has been in the professional ranks every year since 2015 with 76 of his 96 matches played being in USL Championship, becoming one of the most experienced players on Lights FC's roster in the league. He has previously been a part of USL teams Real Monarchs, Pittsburgh Riverhounds, and Reno 1868 FC.

Junior Burgos becomes the ninth player to join the Lights with National Team experience, four of which are on its current roster (Burgos, Conneh, Chester, and Ndaye). He has over 20 appearances with the El Salvador National Team, most recently playing in a friendly against Iceland on January 19, 2020. The midfielder immediately becomes a clear-cut option to be Lights FC's main offensive play-maker and a player who will be a threat in the final third for opposing defenses.

Selected in the MLS SuperDraft by Toronto FC in 2011, Junior Burgos made his Major League Soccer debut on March 31, 2012. He joined Atlanta Silverbacks of the NASL in 2014, where he was coached by Eric Wynalda. His professional career includes two stints in USL Championship, first with the Orange County Blues in 2015 and afterward with Reno 1868 FC in 2017. He returned to his native country the following year to play for Salvadoran titans FAS, before returning to the United States by signing with the New York Cosmos in 2019, where he scored 15 goals.

ALMOST DOUBLING UP ON RETURNERS

After only five players from Lights FC's inaugural roster were a part of the team's sophomore season, a total of nine players were re-signed by the club for its third year.

Goalkeepers Thomas Olsen and Angel Alvarez, defenders Gabe Robinson and Javan Torre, midfielders, Mobi Fehr, Junior Sandoval, Bryan de la Fuente, and Jonathan Levin, plus striker Santiago Echavarría return to Las Vegas for the 2020 season. Five of them played in 20 or more games last season, with four of them having over 2,100 minutes of action in 2019.

After only facing two former players in 2019 (Raul Mendiola and Omar Salgado), Lights FC's has the opportunity to have as opponents up to four of its ex-players in its first match of 2020. Raul Mendiola, Eric Avila and Carlos Alvarez from the Las Vegas 2019 roster, and Irvin Raul Parra from the 2020 team are now members of San Diego Loyal SC.

Parra went on to break the franchise goalscoring record with 15 and is tied for the all-time team-high in assists with seven, becoming one of only four players in the league with at least 15 goals and 7 assists in the 2019 USL Championship season.

Mendiola became the first player in Lights FC history to score goals in double-digits during the same season.  Alvarez was a member of the Las Vegas inaugural roster, scoring 7 goals and serving 4 assists in 2018. Meanwhile, Eric Avila was a midseason addition in the team's first year playing in a total of 22 matches

Saturday's game (7:00 p.m. kickoff) will be aired nationwide on ESPNews with broadcasters Mike Watts and Devon Kerr announcing the action.