Las Vegas Lights FC to Allow Highest Bidder to Design Jersey for One Match; Fans Encouraged to "Get Creative" -- Ask Her To Marry You, Tell Your Kids You Love Them, Promote Your Company, Bring Awareness to Your Cause, Etc. 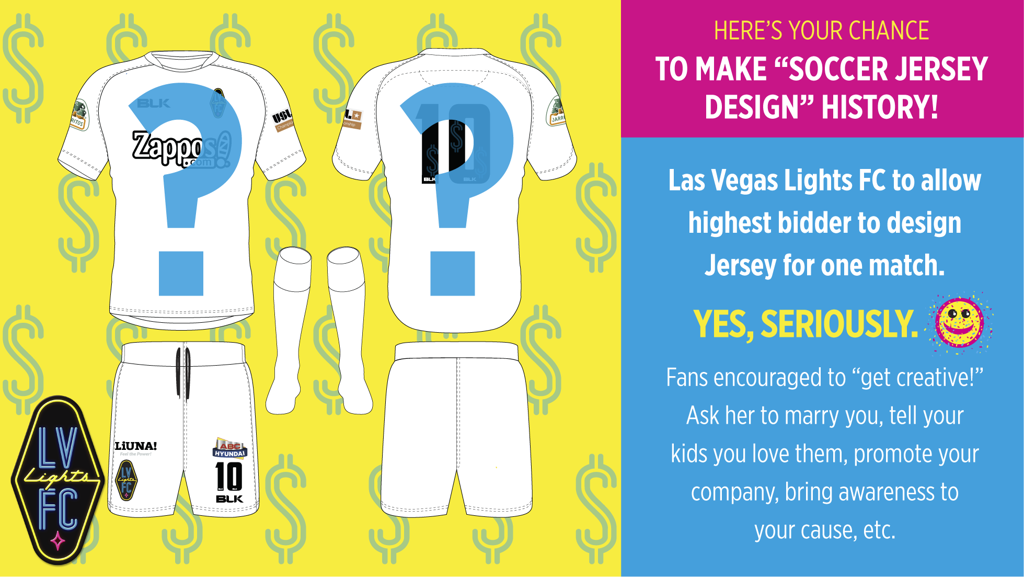 Las Vegas (NV) -- That’s right.  Never-ever done before. We are putting the power of design into one fan’s hand as to what our players will wear for a match this season.

The only rule is simple -- keep it within the realm of reasonableness (so the League Office doesn’t ban it!).   Basically, don’t be stupid or from Reno; otherwise, the team won’t take your money. (Sorry Reno fans -- all of your inevitable stupid ideas are banned!)

Fans are encouraged to go to LightsFC.com/HighestBid to learn more and bid for the right to design the jersey to be worn by Lights FC for a match later this season.  All current Lights FC sponsor logos on the front and sleeve areas must remain on the jersey (e.g., Zappos on the chest and Jarritos & USL Championship on the sleeves). However, the back of the jersey may potentially include third-party sponsor logos above and below the players’ name & number locations.

“Believe it, folks.  The Most Interesting Team in America trusts its fans so much we’re giving you the power of the design -- so make us proud!,” said Lights FC Owner & C.E.O. Brett Lashbrook.  “We are the first team in sports history to design a different jersey for every home match so we can’t wait to see what the highest bidder designs!”