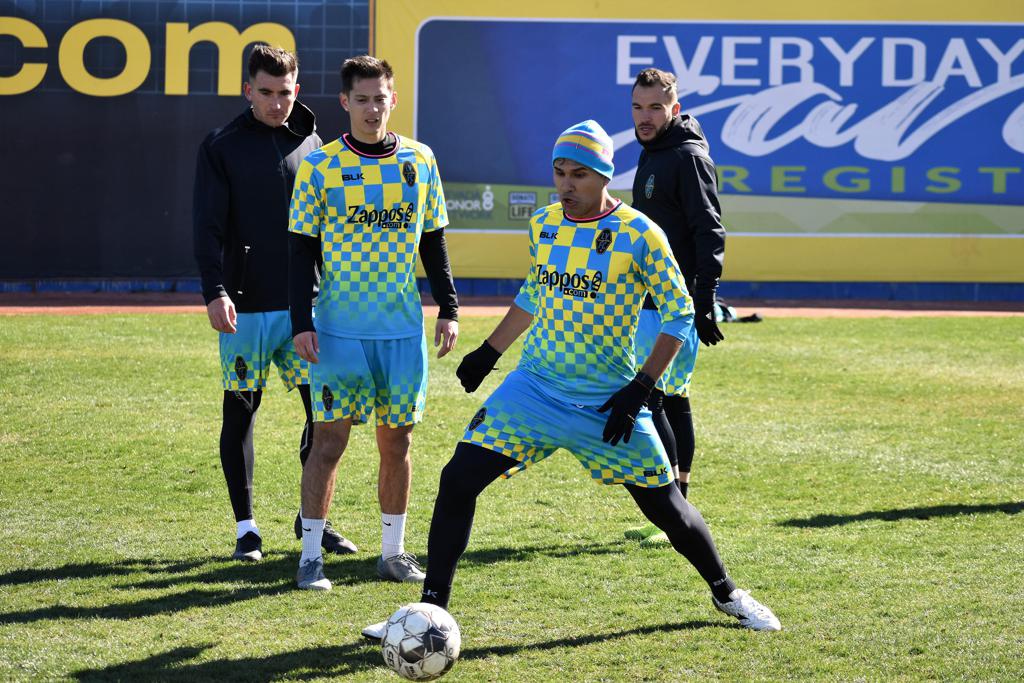 Las Vegas, NV – Lights FC's preseason officially began with the team's first training session of the year on Monday, February 3. After originally being scheduled to take place at the Kellogg-Zaher Soccer Complex, practice was relocated to Cashman Field due to the high winds that have reached up to 70 miles per hour in the Las Vegas valley throughout the day.

This practice marked the first time on the field for two new members of the Las Vegas roster: Ramon Martin Del Campo, and Jordan Murrell. Yamikani Chester, Chancel Ndaye, and Seku Conneh are scheduled to join the team later this week.

"Honestly, it felt great. To see all the boys out here and start growing a family was pretty awesome," said new Lights FC defender Ramon Martin Del Campo. "The standard was definitely set with some of the things that Eric (Wynalda) told us before training. Fans should prepare themselves because it's going to be much different than the last two seasons, we're out here to make this city proud".

Additionally, Lights FC has multiple trialists who are fighting for a spot on the team. One of them is Eric Sanchez, a Las Vegas native who was selected by Eric Wynalda during Lights FC's open tryouts three weeks ago.

"At this time last year we pretty much had a set roster, we made a lot of those decisions early. This is just a different way of doing it," stated Lights FC manager Eric Wynalda. "We're going to let this play out, some of these guys are fighting for spots. We brought in positional players to push the guys who are contracted, to let them know that nothing is a sure thing and that brings out their competitive nature."

Lights FC will practice at 10:30 a.m. both Tuesday, February 4 at and Wednesday, February 5 at the Kellogg-Zaher Soccer Complex, with Thursday's session set for 8 a.m. at Cashman Field. Times and locations are subject to change. Fans can attend all training sessions, as they are open to the public.

After Thursday’s practice, the team will travel to Herriman, Utah where it will face MLS-side Real Salt Lake in a closed-door scrimmage on Saturday, February 8. This will be the first of three preseason scrimmages on the road that Lights FC has scheduled against professional teams. Visits are set against USL Championship opponents L.A. Galaxy II (February 19) and Orange County SC (February 28). After not having being tested on the road during Lights FC's 2019 preseason, Eric Wynalda focused on challenging his 2020 squad with road battles ahead of the 2020 USL Championship campaign.

"The importance of winning games and getting points on the road is the difference between making it to the playoffs and going home early. Last year's team was incredible at home, but on the road, it lacked discipline and getting those results," said Martin Del Campo. "I think Eric (Wynalda) has the right mindset of testing the players to see who are the ones that are disciplined and are going to stay focused on the road. It's important that the fans watching Lights FC at home on TV see their team win on the road so they can get excited about playoff contention."