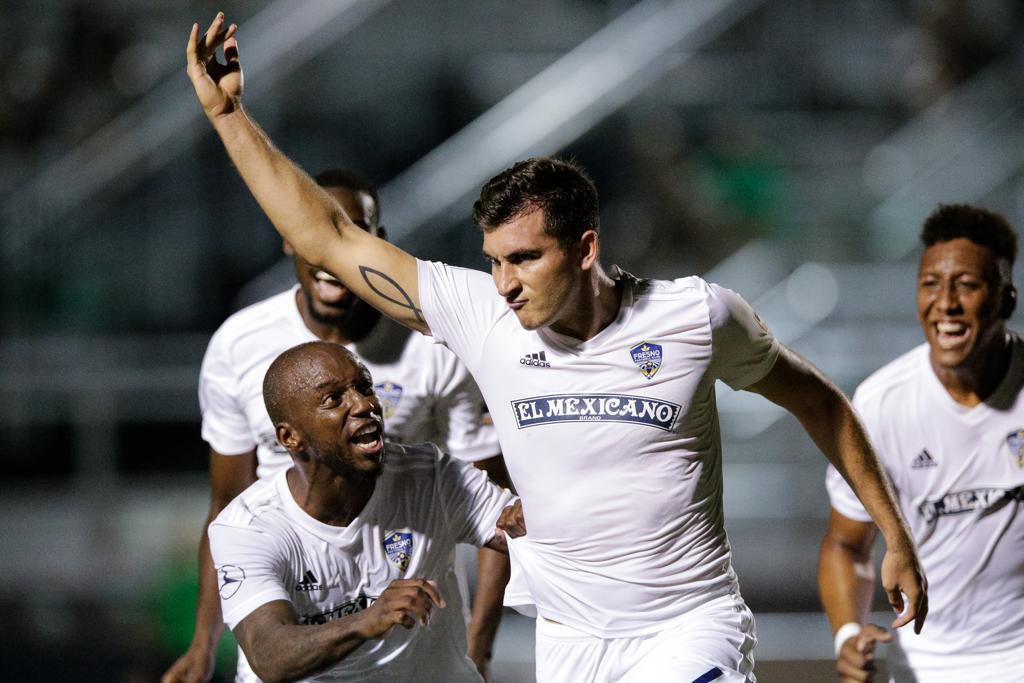 Ramon Martin Del Campo was the leader of Fresno FC's defense in the 2019 season and will now bring that experience to Las Vegas in 2020.

Las Vegas (NV) -- The first Lights FC free agent signing ahead of the 2020 season is one that brings experience and size to the team's back-line, with Las Vegas adding a center back Ramon Martin Del Campo to its roster, pending league and federation approval. The USL Championship veteran is coming off his best season as a professional soccer player, where he was the defensive leader of a Fresno FC side that clinched their first playoff berth with the third-best record in the Western Conference.

“Ramon Martin Del Campo is probably the best signing that we could have for the team at this point,'' said Lights FC manager Eric Wynalda. “We reflect on last year and what the team needs were, and he fits the bill perfectly.  We’re extremely excited to have him join the team. He has great leadership skills and combined with his character and ability to lead from the back makes our backline one of the strongest in the league."

Del Campo made his USL debut in 2017 after being signed by Ottawa Fury, where he was featured in 24 matches. He then went on to make the move to the West by joining expansion team Fresno FC. He racked up over 5,500 minutes of playing time over 63 matches in his two years with the Foxes. All but two of his 87 appearances have been as part of his team’s starting lineup. As the leader of Fresno’s defense, Ramon Martin was considered one of the best center backs in USL Championship during the 2019 season.

"This is a big part of what we’re trying to build here, the culture of having a team that isn’t only going to compete but contends for championships,'' stated Wynalda. “When I look at Del Campo as a player, what he brings to the team, what I see is experience that we need in the back. He’s an incredibly experienced player that’s perfect for this phase of his career. He can take us to the next level.  Del Campo can play and he proved that last season. He’s the full package."

Ramon Martin was born in Hermosillo, Mexico, but he relocated to Southern California with his family shortly after. He had a standout career with Bonita Vista High School (San Diego). Del Campo was offered a scholarship by U.C. Davis after being scouted in a tournament played in Las Vegas. In 2013 Del Campo was named an honorable mention for the All-Conference Big West team, earning a call-up by the United States Men's U23 National Team, seeing action in a 5-1 win against the Bahamas. He finished his collegiate career with the Aggies by being named to the All-Big West Conference Second Team in 2014.

He got his first taste of the professional level in 2015, when he signed a two year contract with Costa Rican titans Deportivo Saprissa, being loaned out during the 2016 season to Puerto Rico FC.

Despite being a young player at only 26 years old, Del Campo brings experience to a backline that is sizing up to be a big one. Ramon Martin is 6 foot 2 inches tall, the same height as returnees Gabe Robinson and Javan Torre, who were the only Lights FC players taller than 6'1" in the 2019 season.

Season tickets for the 2020 USL Championship season are available now starting at just $200 at LightsFC.com/SeasonTix or by calling 702-728-4625. Each season ticket includes a free official 2020 match jersey ($80 retail value), plus multiple other unique benefits. Lights FC was voted by Las Vegas Weekly as the 2019 Best Sports Value in Las Vegas.

Also available for the Holiday Season, Lights FC have voucher books available that include 10 tickets, plus a free winter beanie, a free scarf and more perks. This is a can’t miss special deal with over $300 in value for only $99! To purchase visit LightsFC.com/HolidayPack or call 702-728-4625.