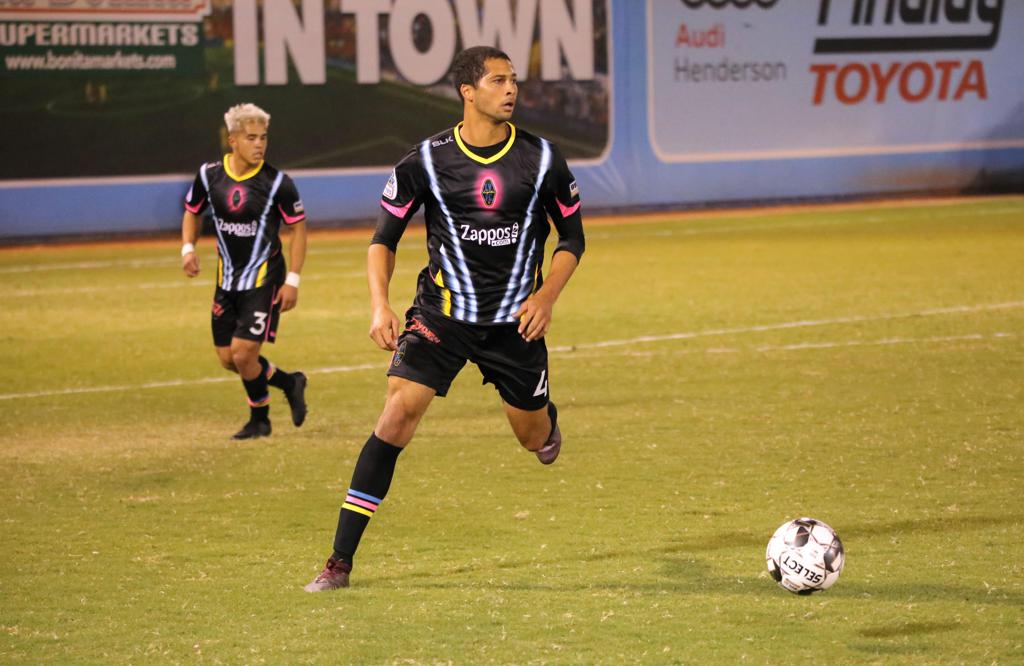 Gabe Robinson leads USL Championship with 180 clearances, being a bright spot for Las Vegas Lights FC in the 2019 season. He has also contributed offensively with three goals off of set pieces.

ALBUQUERQUE, NM -- Lights FC will have one last hurrah in 2019 with their USL Championship regular-season finale coming on the road Saturday night against New Mexico United. The chances for Las Vegas to make it to the playoffs are very slim, with the team focused on trying to close the first year of the 'Wynalda Era' on a positive note.

"In the most recent weeks we've played much better on the road, it was something that we’ve taken a lot of pride in very recently", said Lights FC manager Eric Wynalda. "We’ll take that pride to New Mexico when we’ll put together a performance reflective of what we're capable of. I expect the energy to be there, and I expect the team to clearly go get a result."

Did the team improve compared to its inaugural season? Yes. Is the team where it wants to be? No. Las Vegas racked more victories, earned more points, and lost fewer games than in 2018, taking a step in the right direction. But there is still room to keep growing, with playing deep into October and through November being Lights FC's main objective in the future.

"I think there is a lot of lessons learned this year of what exactly it takes to accomplish our initial goal which is to get to the playoffs", stated Wynalda. "How you accumulate points in this league, how you need to play in certain venues. All those lessons from this year will be applicable to the next."

Lights FC is going into the Duke City wanting to get one more win this year to leave a smile on their fan's faces, even though that could spoil the party for New Mexico. The league newcomers are still fighting for their opportunity to advance into the playoffs, with them getting a spot in the play-in round of the postseason with a win and a draw or loss by either San Antonio FC or Galaxy II.

"We're going to play, we've seen a team in Tulsa that maybe they're in a position where they had no chance to get in, but their results very recently gave them a lot of confidence and to prove to themselves that they can get results and get wins", said Eric Wynalda. "That's going to be our mentality, that it's very important that we go there not just to play well, but to play with a purpose. The result, regardless of the circumstances, is still something that will mean a lot to this club going forward." 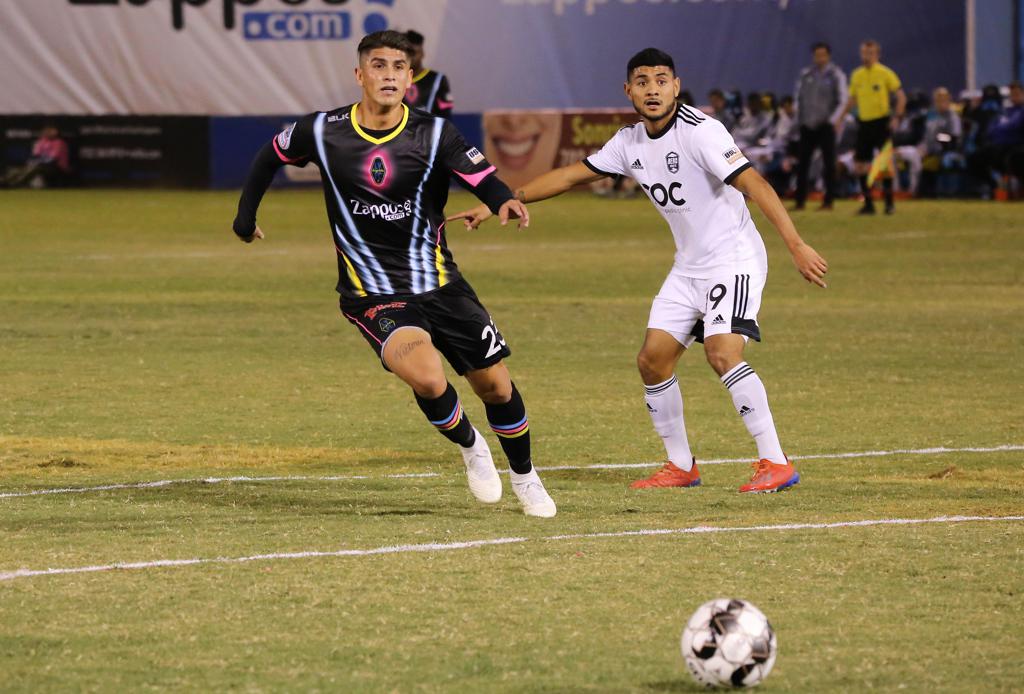 Christian Torres became the first player to surpass the 4,000 minute mark for Lights FC. He is the only member of the Las Vegas roster to be a starter in over 50% of the games in each of the team's two seasons.

New Mexico United is one of seven expansion franchises that made their debut in the 2019 USL Championship season, with them being the only one from the Western Conference that hasn't sealed their spot in the playoffs yet.

United's Troy Lesesne, USL Championship's Coach of the Month for May, landed his first job as a head coach with New Mexico after being an assistant with USL squads Charleston Battery and Charlotte Independence.

Kevaughn Frater is the team leader with 14 goals, but after scoring ten times in his first eleven games of the season he has only found the back of the net four times in the last 17 matches. Santi Moar and Devon Sandoval follow him closely with 11 goals each, plus Chris Wehan has 9 goals. The 45 combined goals between Frater, Moar, Sandoval, and Wehan match or surpass the number of goals scored by eleven teams in USL Championship this season.

Cody Mizell has been the starting goalkeeper in all but one game that New Mexico has played in the regular season, racking up 82 saves. and three clean sheets. 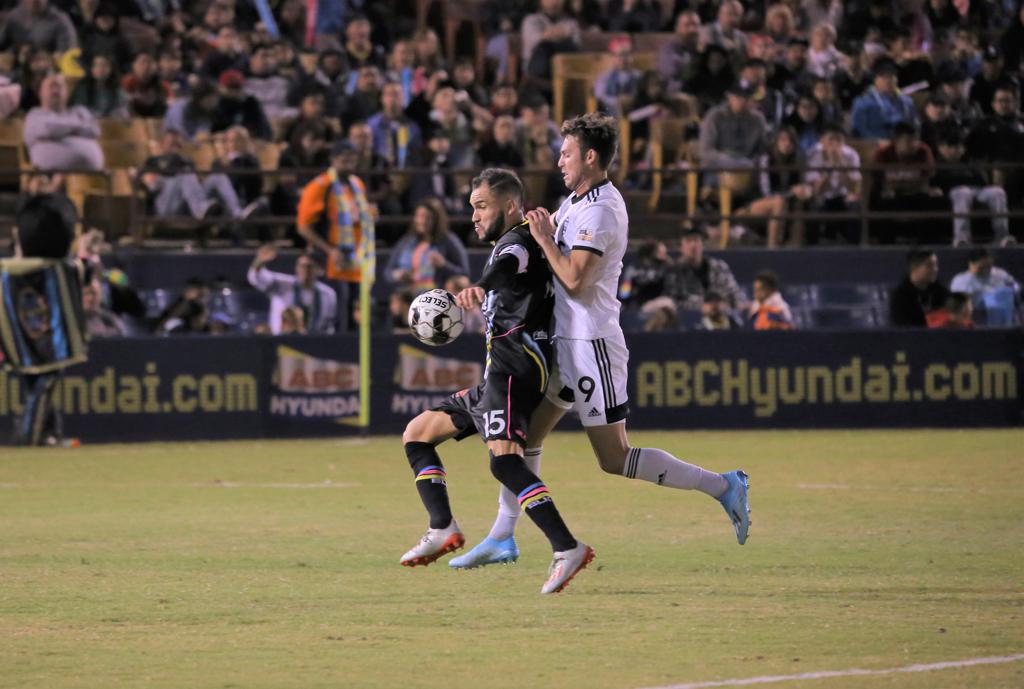 After missing the team's first 23 games due to an ACL tear, Bryan De La Fuente has seen action in the last ten games that Lights FC has played.

SO, YOU'RE TELLING ME THERE'S A CHANCE?

Mathematically, yes. Lights FC enters their final regular-season game of the year with slim chances of making into the playoffs.

Las Vegas needs two results: Beat New Mexico on the road and have San Antonio lose at home against Colorado Springs. Here comes the toughest part: The Lights need to make up for the 13 goal differential between them and San Antonio.

Lights FC closed out their home slate of the 2019 season with a record-breaking crowd at Cashman Field: 10,117. It marked the largest attendance for a USL Championship regular season match played in Las Vegas.

On his rookie season as a professional soccer player, defender Gabe Robinson leads USL Championship with a total of 180 clearances, which is a Lights FC franchise record (Miguel Garduño led Las Vegas in 2018 with 123 clearances).

Robinson is the owner of a pair of single-season team records: most starts with 32 and most minutes played in a year with 2,880. He is one of only four players in Lights FC history with multiple USL Championship Team of the Week selections, with the others being Irvin Raul Parra with 4, while Gabe Robinson, Thomas Olsen, and Raul Mendiola have 2 each.

By playing on Saturday night, Christian Torres will become the only player to have seen action for Lights FC in both the team's season opener and final game of the season in each of their two seasons as a USL Championship franchise.

The Tijuana native leads Las Vegas in starts (48), appearances (51), and minutes (4,004) over the past two years. He has scored three goals in 2019: two in regular-season action and one in MLS Soccer Spring Training against Colorado Rapids.

On September 28 against Colorado Springs, goalkeeper Adam Hobbs was in the lineup for the third time in Lights FC's last four road games. The Santa Monica native hasn't been able to achieve a clean sheet yet, but Las Vegas remains undefeated when he has gotten the start in goal.

Hobbs tied the team-high in a game this season with 5 saves against Real Monarchs, which Thomas Olsen has recorded four times in 2019. Two of the goals Hobbs has been scored on were in added time during the second half (game-tying score at Real Monarchs, and the goal that avoided the clean sheet for Las Vegas in their win at Colorado Springs).

After spending 2018 away from soccer to be with his family, Irvin Parra returned to the pitch this year with Las Vegas and went on to break the franchise goalscoring record with 15, and is tied for the all-time team-high in assists with seven.

By being a part of USL Championship's Team of the Week in week 31, Parra became the first Lights FC player with back to back selections and also the first in the team to reach four T.O.T.W. selections in a season.

Parra's 22 combined goals + assists are the most in a season by a Lights FC player. He is one of only three players in USL Championship with at least 15 goals and 7 assists in 2019, joining Solomon Asante and Junior Flemmings.

Panzani Sousa has been a starter in eight of Lights FC's last nine matches, racking up a total of 675 minutes in that span. 'Ferrety' had only seen action in 82 minutes through Lights FC's first 24 games.

Sousa has taken advantage of the opportunity of getting playing time. He was involved in each of the four goals Las Vegas scored against San Antonio FC on October 5. He has recorded either a goal or an assist in three of Lights FC's last five games.

Cristian Martinez, MLS loanee from Chicago Fire, became the sixth player with National Team experience to be signed by Lights FC. He made his Panamanian National Team debut on February 2016 against El Salvador in a friendly match, Martinez was named as part of Panama’s preliminary 35 man roster squad for the 2018 FIFA World Cup in Russia.

'C-Mart' has capitalized on his time with Lights FC. Since making his debut with Las Vegas, Martinez has recorded two goals and an assist. In his time between Columbus Crew and Chicago Fire of the MLS, plus Pittsburgh Riverhounds and FC Cincinnati of the USL, the Panama native had one goal and three assists in 41 games over 4 seasons.

CONSISTENCY ON THE FIELD

Only one team in the Western Conference has more players than Las Vegas that have surpassed the 2,000-minute plateau: OKC Energy FC with 9, including former Las Vegas midfielder Rafael Garcia.

After allowing 74 goals in 2018 (fourth-worst defense out of 33 teams in USL Championship), Lights FC has enhanced its back-line and is now ranked ninth-best in the Western Conference.

This year Las Vegas has 17 games without allowing multiple goals, with nine of them being clean sheets. The team only had three games where they shut out the opposing offense during its inaugural season, having a total of 13 matches where they didn't allow multiple goals.

Lights FC's opponents have taken a total of 186 corner kicks, with Las Vegas only conceding one goal in those opportunities.

Saturday's game (6:30 p.m. kickoff) will be streamed on ESPN+ with broadcasters Jamie Patel, and Ryan Davis announcing the action.

The Spanish-language radio broadcast with Alvaro Puentes & Alejandro Romo on the call can be listened at ESPN Deportes 1460 AM & online on LVSportsNetwork.com.﻿﻿