Lights FC hosts record-breaking Phoenix Rising FC in midweek battle at Cashman Field. Las Vegas and Phoenix will be under the national spotlight with Wednesday's game being USL's "ESPN Game of the Week" to be streamed on ESPN3. 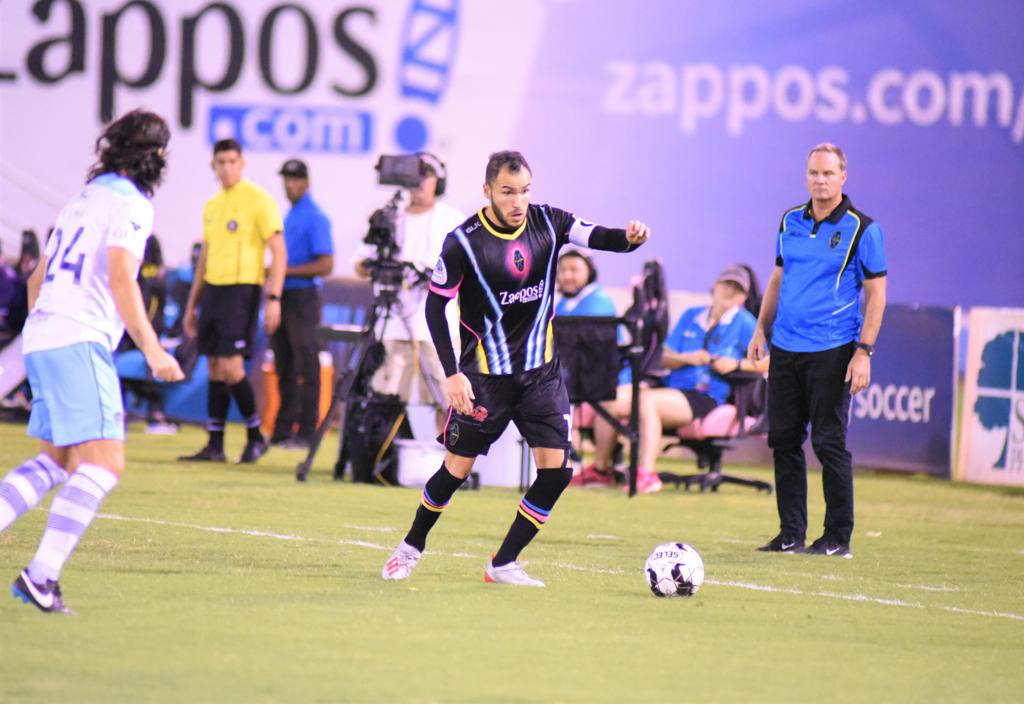 Against El Paso, Lights FC captain Bryan De La Fuente played his first full match in the 2019 USL Championship after returning from an ACL Tear he suffered in preseason action.

Las Vegas, NV -- For the third week in a row, Lights FC will see action on a Wednesday night as the USL Game of the Week pits them against the hottest team in professional soccer: Phoenix Rising FC. For Las Vegas, it'll be key to take advantage of their home field advantage facing a team that has won 18 consecutive regular-season games.

“Phoenix has proven to be an electric team. They have so many weapons and the physicality of the game always goes through the roof when you play against them," said Lights FC manager Eric Wynalda. "They’ve figured out a way to get results which is the mark of a very, very good team. We’re going to make them do something that they haven’t been forced to do and that’s mainly out of respect. It’ll be a great game and I think both teams will be stretched to their limit. All credit to them, they’ve done great but we have no intention of losing points here."

The 0-3 loss against El Paso Locomotive FC was just the third time this season Las Vegas conceded multiple goals at home this season in league play. Lights FC has shut out nearly half of their opponents when they've played at Cashman in 2019, and that's the first step the team needs to take in a potential upset against the squad with the best record in USL Championship.

“In this league, anyone can beat anyone on any given night," stated goalkeeper Thomas Olsen. ”It starts being strong defensively.  We have to be organized and on the same page all game long. Obviously, a team doesn’t win that many games in a row off a fluke. They’ve got some studs and we learned that when we went there earlier in the season. But now we’re at Cashman, so anything can happen.”

Team captain Bryan De La Fuente saw action with Lights FC for the fourth game in a row after recovering from an ACL tear. For the first time this season he was able to play the full 90 minutes as he was on the pitch for the complete match versus El Paso Locomotive FC.

"I keep getting into rhythm, adding minutes as long as my knee keeps responding in a positive way," said De La Fuente. "Against Phoenix or against any other team, either at home or away, we need to get positive results to make a playoffs push."

Phoenix Rising FC, defending Western Conference champions, kicked off the 2019 season with 2 wins, 2 losses, and 5 draws. Since then they've won 18 games in a row, the longest winning streak in American Pro Soccer history. In fact, they're now only three points away from breaking the USL Western Conference record for most points in a single season.

Rick Schantz took over as Rising FC's interim head coach on June 10th last year after the departure of former manager Patrice Carteron. Since then Schantz has led Phoenix to the USL Cup Final, where they lost 1-0 to Louisville City. Due to his success, the club removed the interim tag from his title ahead of the 2019 season.

Phoenix features the top goalscorer in the USL this year in Solomon Asante, who has put the ball in the back of the net 21 times. Rising FC is the only team that features three players in the league's Top-10 scorers, with Adam Jahn tied for third-best with 14 goals, while Junior Flemmings is tied for ninth with 11 goals. 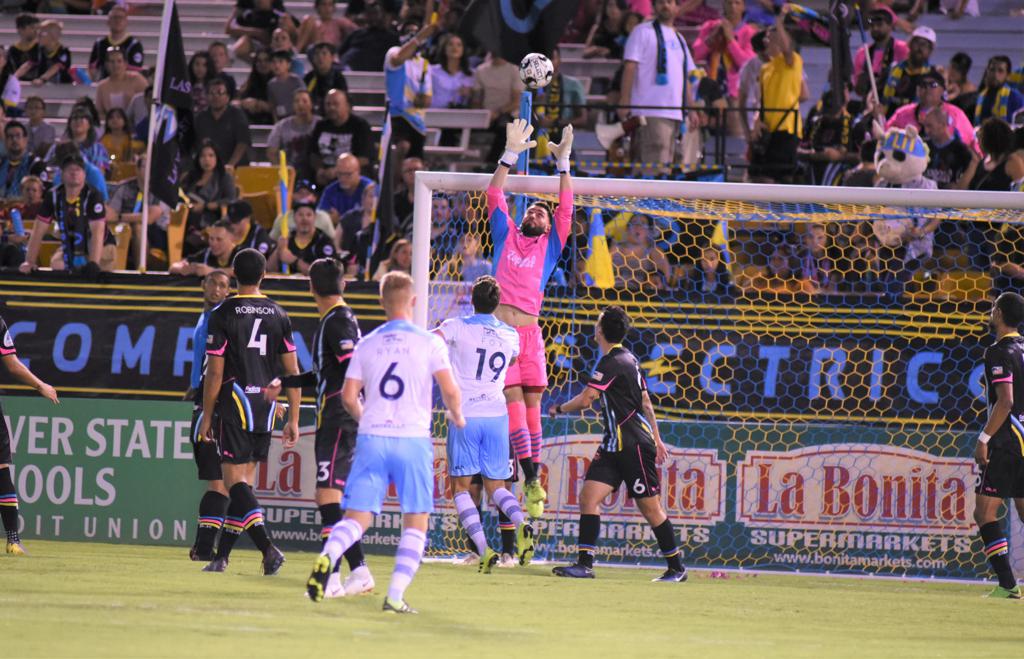 Thomas Olsen has clean sheets in nearly half of Lights FC's home games this season.

On his rookie season as a professional soccer player, Lights FC defender Gabe Robinson is second-best in USL Championship with a total of 139 clearances, only three away from Tulsa's Cyprian Hedrick who leads the league with 142.

Robinson's performances have earned him a spot in USL's Team of the Week twice this season. First in Week 4 after Lights FC's 1-0 win against Real Monarchs, where he recorded 10 clearances and won the 7 duels he was involved in. Then in Week 23 for his performance in a scoreless draw Las Vegas had in Sacramento, adding 12 clearances, winning 3 of 4 aerial challenges, and completing 14 of 19 passes.

After working hard on his recovery for six months, De La Fuente made his 2019 USL Championship debut by being subbed in the 71st minute against Portland Timbers 2 on August 24. He has now played in four games in a row, with his minutes increasing with each match all the way to the full 90 versus El Paso on Saturday, September 7.

For a forward, getting out of a slump is very important. After going 8 matches without finding the back of the net, Tabort Etaka Preston was able to get his fifth goal of the season against Real Monarchs SLC on September 4th.

The "Fresh Prince of Cameroon" is Lights FC's second-leading goalscorer this season. His speed has been a key component to his game, with two of his goals being created with him taking the ball over 40-yards from the center of the pitch into the opponent's box.

Twenty-seven games through the 2019 season, Lights FC hasn't only relied on their strikers and offensive midfielders to find the back of the net, defenders have also delivered by getting goals for Eric Wynalda's side.

Against Real Monarchs, Christian Torres scored his second goal of the year. He joined Javan Torre (4) and Gabe Robinson (3) as Lights FC's defenders with multiple goals this season. The 9 goals Lights FC defenders have so far this year surpass the 6 that Las Vegas had in 2018 (4 by Joel Huiqui and 2 by Miguel Garduño).

He is currently tied with Sammy Ochoa and Raul Mendiola as the leading scorers in franchise history with 10 each. Irvin Raul Parra currently leads Las Vegas not only in goals (10) but also in assists with five. With his next goal or assist, he'll surpass Sammy Ochoa's 15 combined goals + assists from 2018, which led the team in its inaugural season.

Thomas Olsen tied his season-high with five saves against Portland Timbers 2. His performance earned him his second USL Championship Team of the Week selection. “TKO” is seventh-best in the league with 71 saves. 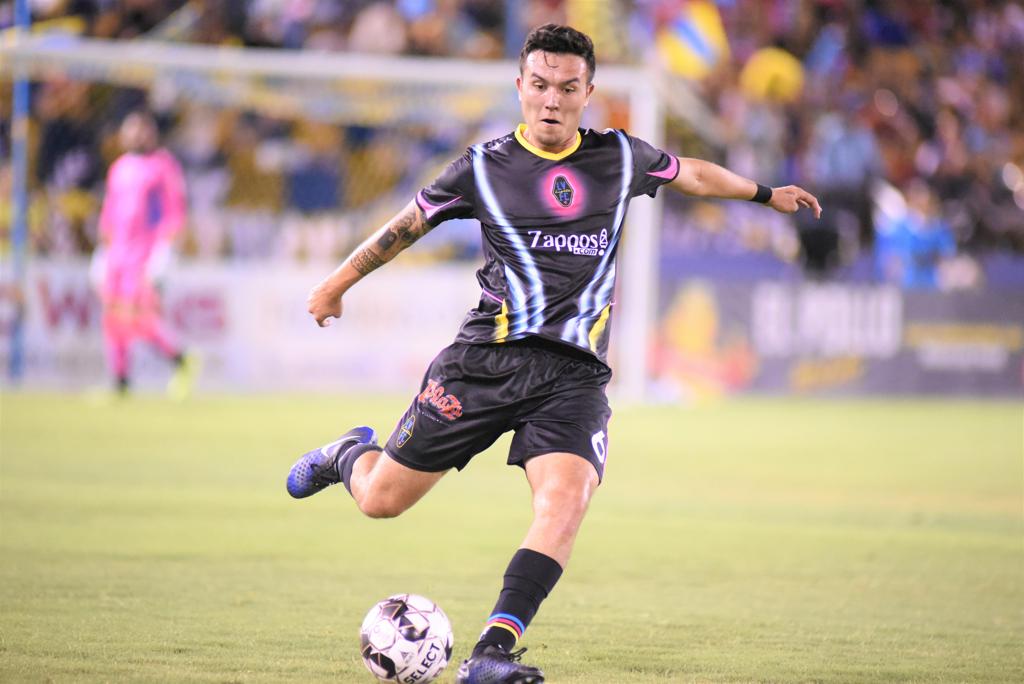 On Saturday versus Locomotive FC, midfielder Mobi Fehr was in Lights FC's Starting XI for the first time since July 4. A lower-body injury kept him out of action for six weeks.

HERE IS EVERYTHING ELSE YOU NEED TO KNOW AHEAD OF WEDNESDAY'S MATCH VS. PHOENIX RISING FC:
** This match is Salute to Local Heroes Night, where Lights FC will honor first responders that have been invited to Cashman Field, including officers from the Las Vegas Metro Police Department, members of Las Vegas Fire & Rescue, local military personnel, EMT's, and more.
** Wednesday’s match kicks off at 7:30 p.m., start time for all Lights FC home matches in 2019. For on-site ticket purchase at Cashman Field, both the box office and will call open at 2:00 p.m. on regular-season gameday. Tickets are available at LightsFC.com/Tix and at every La Bonita Supermarket in Las Vegas.
** The Zappos Tailgate Party begins at 5:30 p.m. in the Cashman Field plaza, where fans can enjoy beer specials, tailgate games for adults and kids, music, the Zappos llamas Dottie and Dollie, Lights FC merchandise, and much more.
WHERE TO WATCH & LISTEN TO LAS VEGAS LIGHTS FC VS. PHOENIX RISING FC:
Las Vegas Lights FC fans will be able to follow-up along with every match of the 2019 USL Championship season via national & local media outlets.

Wednesday's game (7:30 p.m. kickoff) is USL Championship's Game of the Week and will be streamed nationwide on ESPN3 with broadcasters Michael Watts and Devon Kerr announcing the action.

The Spanish-language radio broadcast with Alvaro Puentes & Alejandro Romo on the call can be listened at Deportes Vegas 1460 AM & online on LVSportsNetwork.com. ﻿