Lights FC kicks off a three-match homestand in a late season hunt for a playoff spot by first hosting El Paso Locomotive FC. 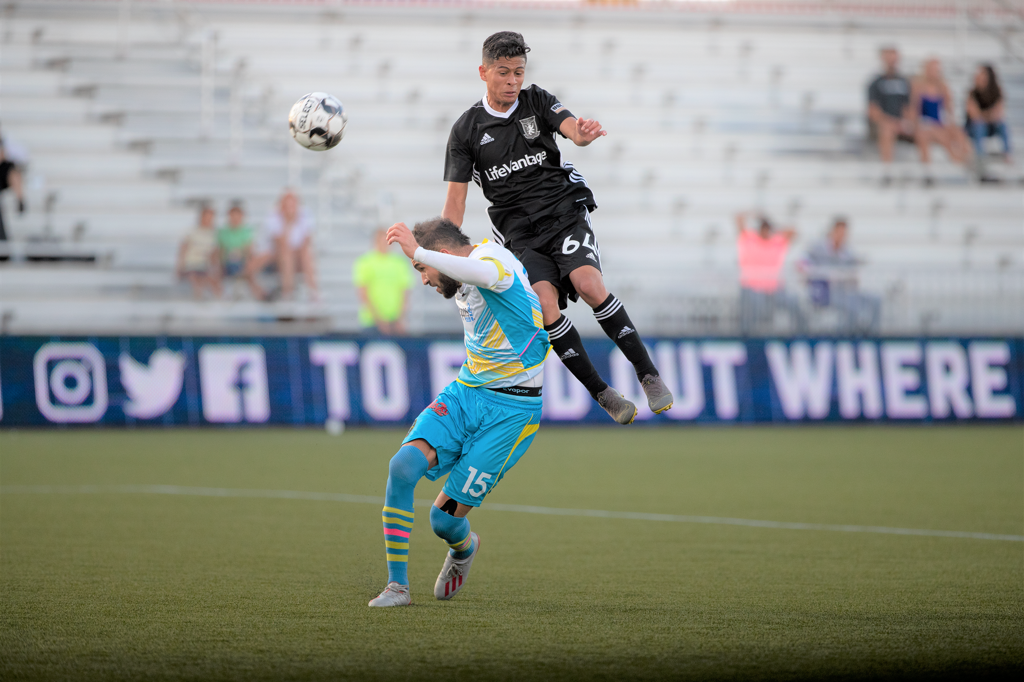 Lights FC captain Bryan De La Fuente played in his third consecutive game since making his return from an ACL Tear. Against Real Monarchs SLC, he logged in a season-high 68 minutes of playing time.

Las Vegas, NV -- Lights FC and Locomotive FC are fighting to get into a playoff spot with less than two months left in the USL Championship regular season. Their clash at Cashman Field this Saturday will be crucial for the aspirations of both Las Vegas and El Paso to play in postseason action.

"This match is going to be monumental for us, we're going to bring it to El Paso," said Lights FC manager Eric Wynalda. "It has the makings of a fantastic game, we're looking at this match as a playoff game, the winner will set themselves up in a very good position."

On Wednesday, Tabort Etaka Preston scored his fifth goal of the season, which was his first since his game-winning goal on the road against El Paso on June 22. For Lights FC being able to have the Cameroonian striker put the ball in the back of the net is key, opening more options for the Las Vegas attack.

"It’s going to be very different from when we played them in El Paso because we are at home, so we’re not going to hold back," stated Tabort Etaka Preston. "I'm trying to get my groove back and help score as many goals as I can to help the team. We have a big responsibility on our back and we have to deliver."

Out of the three opponents that Lights FC will host in the next week and a half, Locomotive FC is the only one that Las Vegas was able to get a good result against on the road, but they know it won't be easy to sweep the season series against El Paso.

"Having already beaten them and having it be our only away victory actually sets them up to be highly motivated to earn back those points", said Lights FC manager Eric Wynalda. "El Paso is a tricky team. They’ve had some very difficult times in their community and those are things that always remind you life is a heck of a lot bigger than sports or any game. It will be a very good and highly competitive game, we’re going to have to be at our best to get the three points."

Locomotive FC has shown that one of their strengths is obtaining positive results away from El Paso, kicking off the season by going undefeated in their first seven road games. Despite losing three out of their last four road matches, only one of those defeats was by multiple goals. El Paso has come out with points in eight out of their 11 road battles, allowing more than one score in just two of those games.

Locomotive FC features former U.S. National team member Jerome Kiesewetter, the USL Championship player of the month in May and who is currently tied for sixth-best in the league in goals with 11. Former Lights FC midfielder Omar Salgado has scored 4 goals and delivering 5 assists in 24 games for his hometown team.

Logan Ketterer has starred as El Paso's starting goalkeeper, racking up nine clean sheets. He has only conceded 23 goals in 22 games, leading the Locomotive FC defense to be the third-best in the Western Conference this season (total of 28 goals allowed). 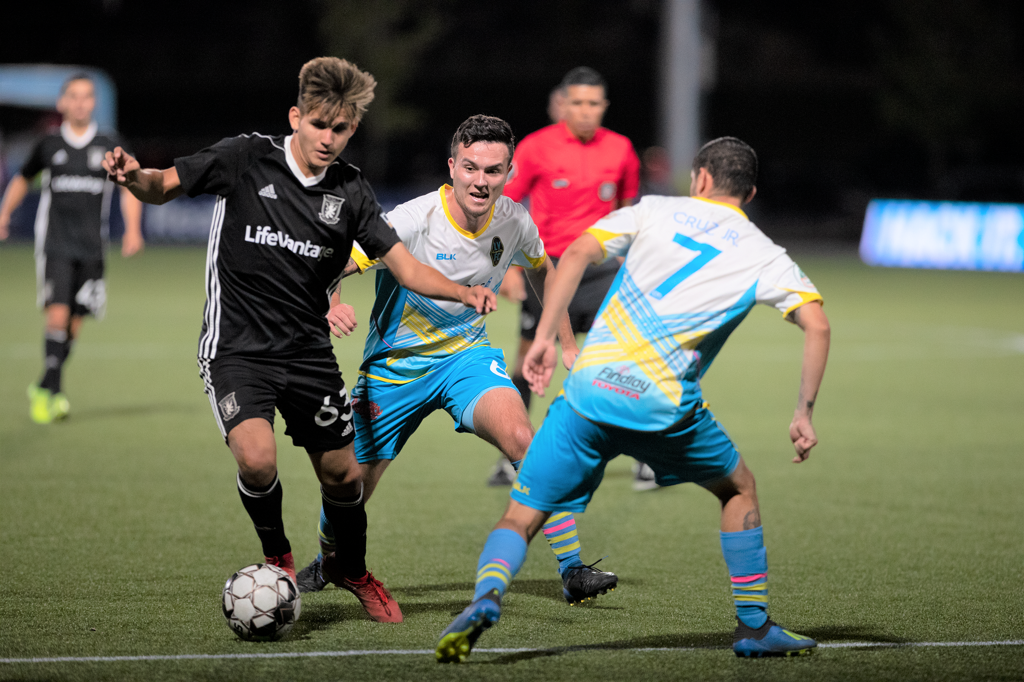 A lower-body injury left midfielder Mobi Fehr out of action for two months. Against Real Monarchs SLC, he made his return as a second half substitute.

Lights FC will have to take advantage of their home-field advantage in the final stretch of the season to keep their playoffs aspirations high. Las Vegas has shown their best football while playing in front of their fans, where in twelve games they have 7 wins, 4 draws, and only one loss. The Lights have outscored their opponents at Cashman by a combined 24 goals to 8.

The match against El Paso is the first of a three-game homestand, which will continue by facing defending Western Conference Champions Phoenix Rising FC on Wednesday, September 11 for Tribute to Local Heroes Night, concluding on Saturday, September 14 Lights FC versus Fresno FC on Hispanic Heritage Night.

For a forward, getting out of a slump is very important. After going 8 matches without finding the back of the net, Tabort Etaka Preston was able to get his fifth goal of the season against Real Monarchs SLC.

The "Fresh Prince of Cameroon" is Lights FC's second-leading goalscorer this season. His speed has been a key component to his game, with two of his goals being created with him taking the ball over 40-yards from the center of the pitch into the opponent's box.

Twenty-six games through the 2019 season, Lights FC hasn't only relied on their strikers and offensive midfielders to find the back of the net, defenders have also delivered by getting goals for Eric Wynalda's side.

Against Real Monarchs, Christian Torres scored his second goal of the year. He joined Javan Torre (4) and Gabe Robinson (3) as Lights FC's defenders with multiple goals this season. The 9 goals Lights FC defenders have so far this year surpass the 6 that Las Vegas had in 2018 (4 by Joel Huiqui and 2 by Miguel Garduño).

With his diving header game-winning goal against RGV FC, Parra reached 10 goals in the 2019 season, becoming the second Lights FC player with double-digit goals in a single season while being the fastest one to do so in only 18 games.

He is currently tied with Sammy Ochoa and Raul Mendiola as the leading scorers in franchise history with 10 each. Irvin Raul Parra currently leads Las Vegas not only in goals (10) but also in assists with five. With his next goal or assist, he'll surpass Sammy Ochoa's 15 combined goals + assists from 2018, which led the team in its inaugural season.

Thomas Olsen tied his season-high with five saves against Portland Timbers 2. His performance earned him his second USL Championship Team of the Week selection. “TKO” is tied for sixth-best in the league with 63 saves.

THE CAPTAIN IS BACK

After working hard on his recovery for six months, De La Fuente was cleared to play after training for three weeks full force with his squad. He made his 2019 USL Championship debut by being subbed in the 71st minute. Four days later he was a halftime substitution against Tulsa Roughnecks FC, playing the full second half of the match. Versus Real Monarchs he got his first start of the season, playing 68 minutes before being subbed out of the game.

Lights FC struck a loan deal with LAFC to add Rodolfo Zelaya to its roster. Zelaya is one of the most decorated players in El Salvador soccer history, earning 44 caps with his national team where his 21 goals have him trailing only Raúl Díaz Arce as his country's top goalscorer. He played vital roles for El Salvador in the 2011 and 2013 CONCACAF Gold Cups, where he scored 4 goals in each.

"Fito" has been on the field for 138 minutes while with Las Vegas, leading the team in shots and shots on goal in the two matches as a member with Lights FC. He has played 20 more minutes with Las Vegas than he has with LAFC since the 2019 MLS season kicked off. Zelaya got called up by the El Salvador National Team on Monday, he will be a part of the 23-man roster that will play in Concacaf Nations League action on September 7th and 10th. 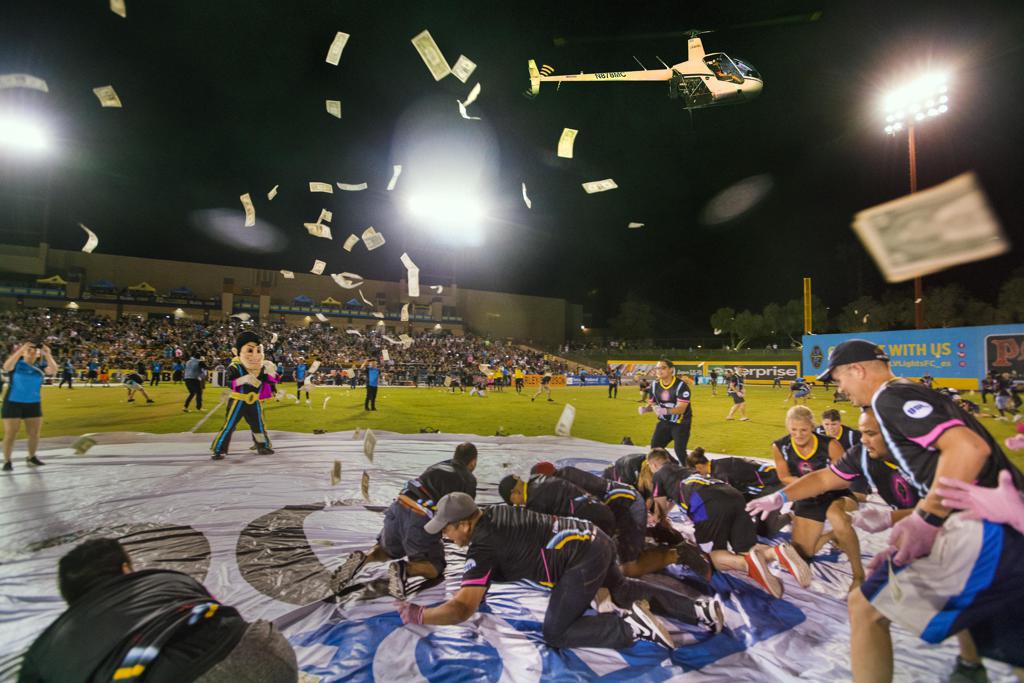 HERE IS EVERYTHING ELSE YOU NEED TO KNOW AHEAD OF SATURDAY'S MATCH VS. EL PASO LOCOMOTIVE FC:

** Doubling in size from last year’s enormously successful event, the Helicopter Cash Drop returns with more prizes and gifts, including $5,000 cash and $5,000 in 'Plaza Bucks' from the Plaza Hotel & Casino. Entry will be limited to 200 participants aged 21 & over.

** The Pitchside Pool Party will keep rolling in the two weekend home matches Lights FC has in September (9/7 vs El Paso, 9/14 vs Fresno). It features multiple "swimming pools" located pitchside to bring fans as close to the action as possible. Each pool rental is priced at $50 and can be reserved at LightsFC.com/PoolParty, calling 702-728-GOAL or by visiting the Lights FC Guest Services Booth at Cashman Field on match days.