Receive Tickets to BOTH Leagues Cup Final & Any Lights FC September Home Match for Only $35! Lowest "All-In" Price In Town -- No Hidden Fees; Special Offer Available Only at LightsFC.com/2Pack Until Inventory Expires. 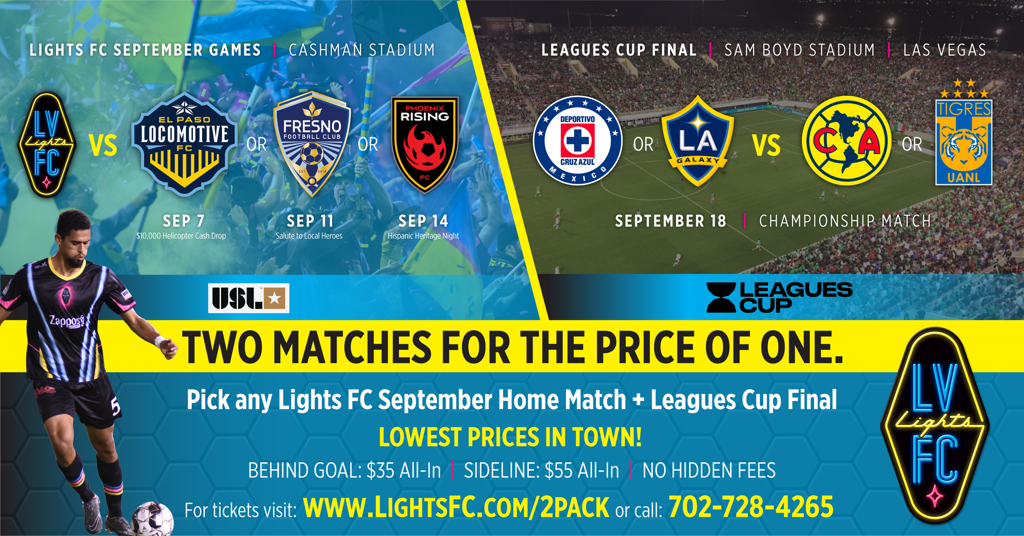 Soccer fans in Las Vegas will have the opportunity to purchase Leagues Cup Final tickets for the best price in town with the Lights FC "Two-Pack".

Las Vegas (NV) -- Las Vegas is a soccer city.  We already know it. But according to Mayor Goodman it’s now time to prove it to the rest of the county!

“Mayor Goodman has issued a challenge to our community to prove what we already know to be correct -- that Las Vegas is a great soccer city,” said Lights FC Owner & C.E.O. Brett Lashbrook.  “She has been soccer’s number one supporter locally and Lights FC wouldn’t exist without her support, guidance and will to make it happen.”

“September is shaping up to be a big month for professional soccer in Las Vegas with the exciting Lights FC and the Leagues Cup Final,” Mayor Carolyn G. Goodman said. “I encourage everyone to get out and show how much Las Vegas loves soccer and major league sports!”

The first-ever Leagues Cup, the new annual competition between Major League Soccer and Liga MX, will culminate in Las Vegas with the Leagues Cup Final on Wednesday, September 18th at Sam Boyd Stadium.  Featuring teams from both MLS and Liga MX (Mexico’s top division) the final will pit the winner of the August 20th semifinals: (i) Club América vs. Tigres UANL and (ii) LA Galaxy vs. Cruz Azul.