Lights FC kicks off a three-game California road trip on Saturday, August 3 by taking on the only Western Conference team they haven't faced yet, the Fresno FC Foxes. 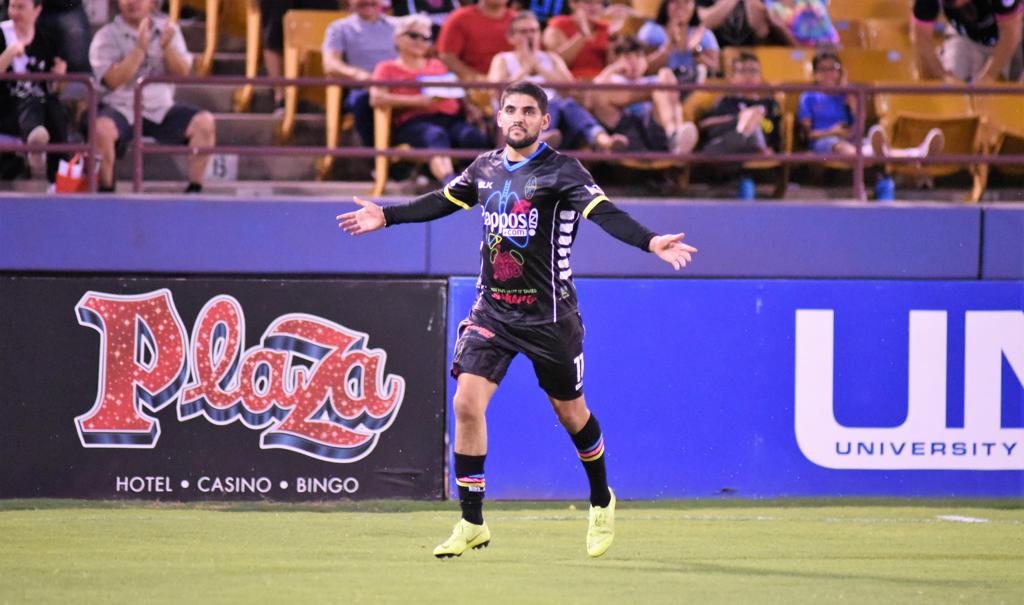 Irvin Raul Parra became the second player in Lights FC history to reach double-digit scoring in a season with his game-winning goal against RGV FC Toros.

Las Vegas, NV – As the calendar turns to August, Lights FC faces the tough-challenge of it being their only month of the season where they have four road matches, kicking off this Saturday with a visit to the Fresno FC Foxes, only Western Conference team that Las Vegas has yet to face this season.

“The entire year has been a challenge for us on the road," said Lights FC manager Eric Wynalda. "Our next three opponents are probably going to be our biggest challenges of the year. To go to Fresno, which at times has been one of the hottest teams in the USL. Sacramento is always a hard place to go play.  Finishing the 3 game road trip against our neighbors Orange County SC. These three games will be very telling of what kind of mentality and character this team has."

“Every away game is big for us right now,'' stated defender Kevin Garcia-Lopez. "We need all the points that we can get, this away match and all the others are super important for us.” Garcia-Lopez is one of nine players on Lights FC's roster who are California natives and for whom playing in their home state brings additional motivation to get positive results in these road matches.

After being short on resources against RGV FC due to suspensions and injuries, Lights FC's roster has been re-boosted for this critical stretch of games in Northern California. Dutch midfielder Vinnie Vermeer returns to Las Vegas after being recalled by Nashville SC only a week into his loan with the Lights. Meanwhile, defender Javan Torre and midfielder Jesus Gonzalez are once again eligible to play after serving one-game suspensions for their direct red cards against Tacoma Defiance on July 24.

Las Vegas got back in the win column by defeating RGV FC Toros 2-1 at Cashman Field, raising their point total this year to 26 points. With two and a half months left in the USL Championship regular season, the battle for playoff spots is tightening up. Lights FC currently sits in 14th place, but they're only 3 points behind El Paso Locomotive who is in a 3-way tie for 6th place in the Western Conference.

Fresno FC is coming off of their first defeat in two months. Their loss on the road against Austin Bold FC halted the seven-game undefeated streak that saw them rise in the Western Conference standings, where they currently sit in third place.

Adam Smith was announced as the inaugural coach for the Foxes on November 9, 2017, after having a successful three-year stint as a top assistant with Sacramento Republic FC. He led Fresno FC to a 12th place finish with 39 points in the 2018 season.

Jemal Johnson and Qudus Lawal are tied as Fresno's top goalscorers with 7 each. Four more Foxes players have scored at least 3 goals in 2019: Arun Basuljevic with 4, plus Jackson, Jaime Chavez and Christian Chaney with 3 each.

C.J. Cochran has started at goal every regular season match for the Foxes this year, where he's the leader of the second-best defense in the West by only allowing 20 goals in 20 games. He has shutout his opponents in six matches this season, surpassing the 5 regular season clean sheets he had as a backup goalkeeper between his 2018 and 2017 seasons with Fresno and OKC, respectively. 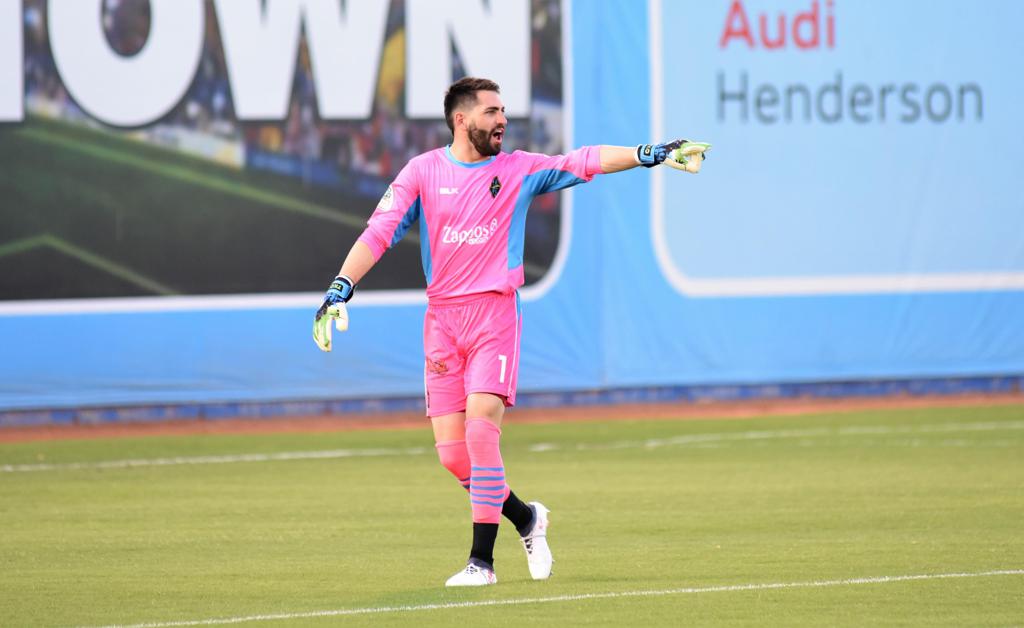 Thomas Olsen's 5 saves against the Toros tied his season high in a match this season.

WHERE IT ALL STARTED

Saturday's game in Fresno marks the first time Lights FC will be back at the stadium where they made their USL Championship debut on March 17, 2018. Matt Thomas, Alex Mendoza, and Joel Huiqui scored for Las Vegas to give the team a 3-0 lead in what ended up being a 3-2 victory on the road.

With his diving header game-winning goal against RGV FC, Parra reached 10 goals in the 2019 season, becoming the second Lights FC player with double-digit goals in a single season while being the fastest one to do so in only 18 games. He also is now tied with Sammy Ochoa and Raul Mendiola as leading scorers in franchise history with 10 each.

Irvin Raul Parra currently leads Las Vegas not only in goals (10) but also in assists with four. With his next goal or assist, he'll tie Sammy Ochoa's combined goals + assists from 2018, which led the team in its inaugural season.

His ten goals have the Inglewood native ranked fifth-best in USL Championship's Western Conference, he's one of only seven players in the league to reach double-digit scoring so far this season.

Irvin Raul Parra and Jose Villarreal weren't just born in the same city (Inglewood, California), but also in the same hospital and only three weeks apart. They were childhood friends, grew up together playing on the same fields and made their professional debut the same year (2012).

Since Villarreal's signing with Las Vegas two months ago, they had been on the field together only 126 minutes ahead of Saturday's victory against RGV FC. That match marked the third time with both being in Lights FC's Starting XI and they connected for the game-winning goal, with Villarreal serving a pinpoint-accurate cross to Parra who with a diving header gave the team the definitive 2-1 lead.

The Las Vegas-born & raised goalkeeper is fourth-best in USL Championship with seven clean sheets, which is more than double the times (3) Lights FC shutout their opponents in a total of 38 games in 2018. His 56 saves have "TKO" tied for fifth-best in the Western Conference.

Twenty games through the 2019 season, Lights FC hasn't only relied on their strikers and offensive midfielders to find the back of the net, defenders have also delivered by getting goals for Eric Wynalda's side.

Javan Torre and Gabe Robinson have 3 goals each, with Christian Torres having one himself. The 7 goals Lights FC defenders have so far this year surpass the 6 that Las Vegas had in 2018 (4 by Joel Huiqui and 2 by Miguel Garduño).

A lower-body injury early in the season hurt the high aspirations that Edwin Rivas had put on himself going into his first year with Las Vegas, logging in only 80 minutes of play in the team's first 12 regular season matches.

Rivas started finding more consistent playing time as a substitute starting in June, scoring his first official goal with Las Vegas against New Mexico United. In Lights FC's latest outing he got his first league start, played his first complete game of the year and earned praise from Eric Wynalda for playing in a high level as a left-back (natural positions: midfielder / forward), leading the team in clearances with 8.

Defeating RGV FC was Lights FC's sixth win at home in 2019, matching the number of victories the team had at Cashman Field in 2018. Las Vegas still has six more home matches at home this season.

The 8,818 fans that enjoyed Lights FC defeat the Toros 2-1 was the third biggest crowd Las Vegas has hosted this season. With it, the attendance total this year (including MLS Soccer Spring Training and Lamar Hunt U.S. Open Cup action) surpassed 100,000 at Cashman Field.

Dutch midfielder Vinnie Vermeer returns on loan to Las Vegas, this after being with Lights FC for a week before being recalled by Nashville SC. A native of the Netherlands, Vermeer came up through the youth academy of Dutch giants PSV Eindhoven.

Las Vegas added goalkeeper Adam Hobbs to its roster. He started in a total of 58 matches for Cal State Northridge University, being named second-team All-Big West Conference and earning three Big West Defensive Player of the Week honors in his redshirt senior season. After graduating he played with FSV Optik Rathenow of Germany's Regionalliga Nordost.

Argentinian midfielder Lucas Scaglia informed Lights FC's front office of his intentions to retire from professional football. He played a total of 9 matches for Las Vegas, racking up 609 minutes. 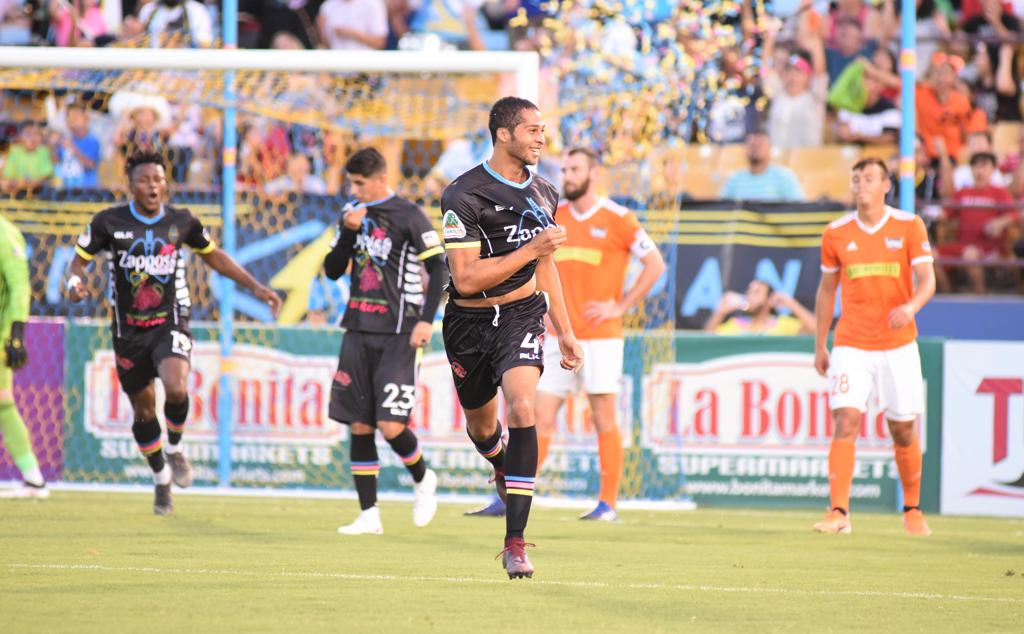 Gabe Robinson's goal against RGV FC was the seventh for the Las Vegas defense this season, surpassing the six that Lights FC's defenders scored in 2018.

Saturday's game (7:30 p.m. kickoff) will be aired nationally on ESPN+ with broadcasters Chris Wittyngham and Gary Bailey announcing the action.

The Spanish-language radio broadcast with Alvaro Puentes & Alejandro Romo on the call can be listened at ESPN Deportes 1460 AM & online on LVSportsNetwork.com.﻿