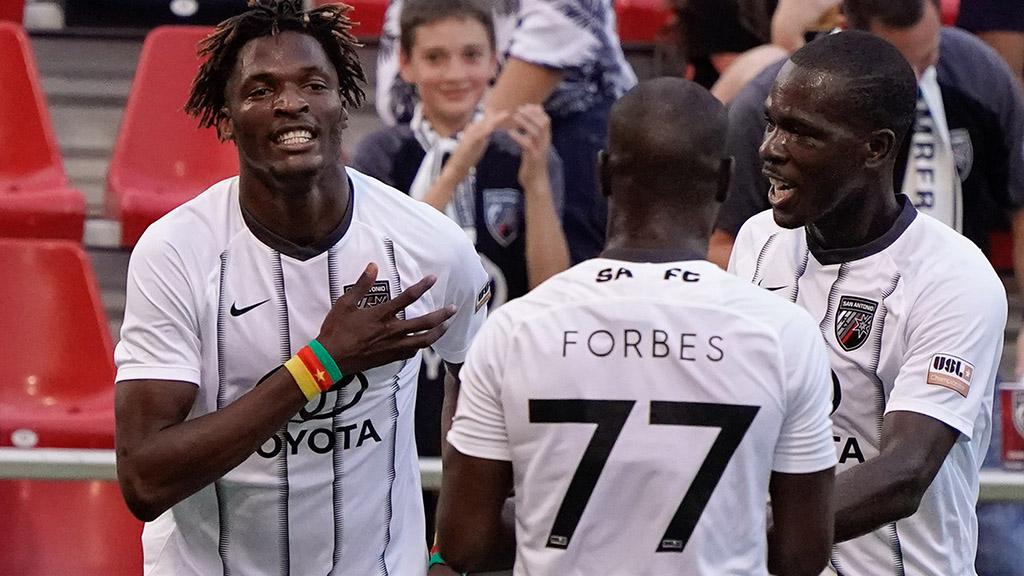 SAN ANTONIO – San Antonio FC scored twice in the first half to take a 2-0 victory against Laredo Heat SC in the Second Round of the Lamar Hunt U.S. Open Cup on a night that also saw United States U-15 international Leo Torres make his professional debut in the second half at Toyota Field.

San Antonio took the lead in the 17th minute when Pascal Eboussi arrived right on time to connect with a corner kick from the left by Jack Barmby as his header found the back of the net. Barmby added a second assist on the night four minutes before halftime as a quickly taken short corner on the right allowed the English midfielder to find Ever Guzman at the back post for a side-volleyed finish that rang off the underside of the crossbar and just over the line to put the hosts ahead by two at the break.

The hosts then saw three of its top young players make their first appearances in the second half when Jose Gallegos and Carson Price both came on before the hour-mark. The 15-year-old Torres, who this preseason signed as the youngest player in SAFC’s history, was then introduced for his debut with 14 minutes to go before recording one key pass while completing 3 of 4 passes overall on his debut.

San Antonio almost added to its lead with 16 minutes to go, meanwhile, as Guzman was denied by Rayados goalkeeper Carlos Herrera on a close-range finish to the right corner of the net. There would be no need for an insurance goal for SAFC, however, as it advanced for a matchup against Texas rival Austin Bold FC in the Third Round.

LAS VEGAS LIGHTS FC 2, CAL FC 0: Goals in either half by Sammy Ochoa and Victor Rojas sent Lights FC through to the Third Round of the Open Cup as Head Coach Eric Wynalda’s side defeated his former club at Cashman Field.

Lights FC took the lead in the 13th minute when Ochoa got on the end of a good cross from the left by Edwin Rivas to head home from close range for his third goal in all competitions this season. The visitors had chances to level before the halftime break, and James Alewine had a long-range effort saved by Lights FC goalkeeper Angel Alvarez before Orr Barrouch missed the target with a pair of other chances.

Las Vegas took a stronger grip of the game five minutes into the second half, however, as halftime substitute Pablo Cruz had an immediate impact as he knifed through Cal’s defense on the left side and set up Rojas for a first-time finish into the right corner of the net. Cal tested Alvarez again on a shot by Alewine three minutes later, but that proved the lone shot on goal from the visitors in the second half as Lights FC saw out the victory.

OKC ENERGY FC 3, NTX RAYADOS 1: Energy FC scored twice from the penalty spot in the final 10 minutes to pull away for victory against Rayados at John Crain Field to send OKC into the Third Round of the Open Cup, where they will face fellow Championship side the Tampa Bay Rowdies on Wednesday, May 29.

Neither side was able to find a breakthrough in the first half as Kyle Hyland’s shot off the crossbar late in the first half for Energy FC proved the closest the game came to a goal, but six minutes after the break OKC took the lead when Amer Sasivarevic headed home from close range off a corner kick from the right by Alexy Bossetti. NTX hit back just past the hour-mark, though, when Christian Okeke fired home a low finish from a tight angle on the right to level the score.

Energy FC regained control of the game with 10 minutes to go, however, as Sasiveravic was brought down in the penalty area, which allowed Christian Eissele to step up and convert from the spot. OKC then put the game away deep in stoppage time as Omar Gordon was brought down on a breakaway, and Je-Vaughn Watson fired a low shot that eluded the Rayados goalkeeper from the spot to cement Energy FC’s place in the next round.