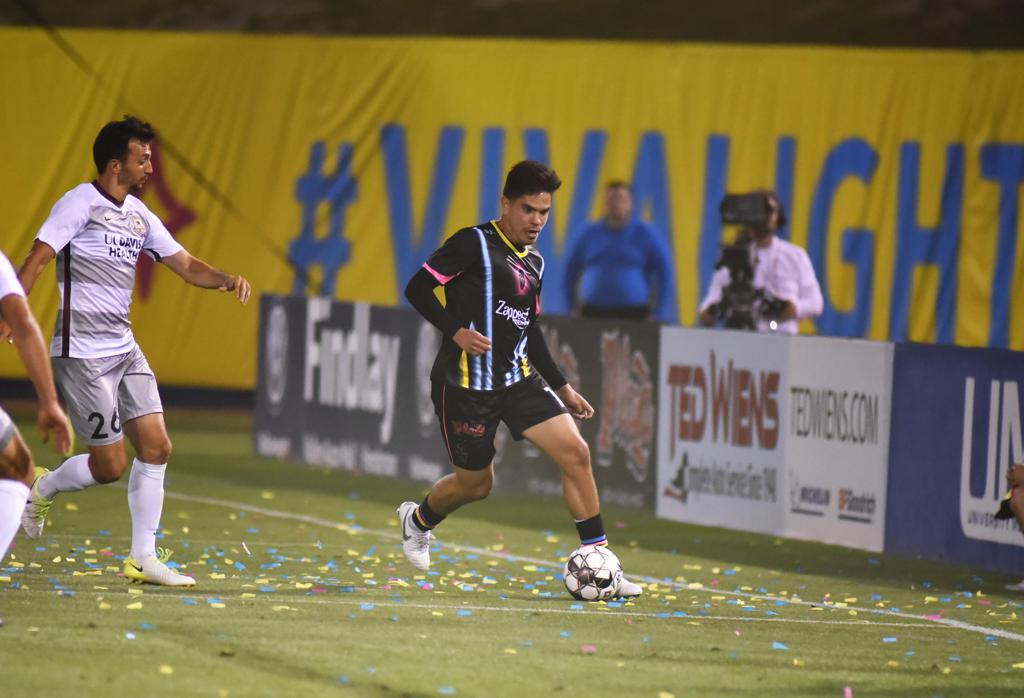 Cristhian "Tripa" Hernandez has shined for Lights FC coming off of the bench in the last 4 games, where the team has 2 wins, a draw and only one loss.

Las Vegas, NV – Lights FC looks to continue their dominance at Cashman Field as they will host Colorado Springs Switchbacks FC on Saturday, May 11. To kick off the Mother's Day Weekend celebration, every soccer mom driving to the game in a minivan will get free parking and women's merchandise will have a 50% discount both at the team store inside the stadium and at the Zappos tailgate.

After their 4-2 statement win over Sacramento Republic FC, one of the best teams in the Western Conference, Las Vegas is focused to keep their positive momentum going with another performance that will continue their rise in the standings. This will be the first of 3 games in an 8-day span for Lights FC, as they'll debut in the 2019 Lamar Hunt U.S. Open Cup on Tuesday, May 14 by hosting Cal FC and then return to league play with a difficult road test on Saturday, May 18 against Phoenix Rising.

"The group is in good form and good spirits, I like that part of it. But we have to be very wary about how we address this game," stated Lights FC manager Eric Wynalda. "Tactically it will be a little different to what we've seen in the past. It’s not that we won't be trying to spend energy, but we want to win this game efficiently. That's part of it, but this is an unbelievable opportunity for us to accumulate some points, give our fans a show at home and get a better spot in the table."

Despite Colorado Springs Switchbacks FC being winless since March 23, Las Vegas respects their opponent and will work towards getting a fourth consecutive victory at home. “As we always say in the locker room, in this league there are no good or bad teams, we’re all on the same level”, said Lights FC midfielder Victor Rojas. “Every game is difficult, either at home or on the road. Last week we were in the bottom part of the standings and we know we can keep rising spots. So we can't let our guard down, we need to stay focused and work hard without caring who’s in front of us, we have to focus on ourselves” 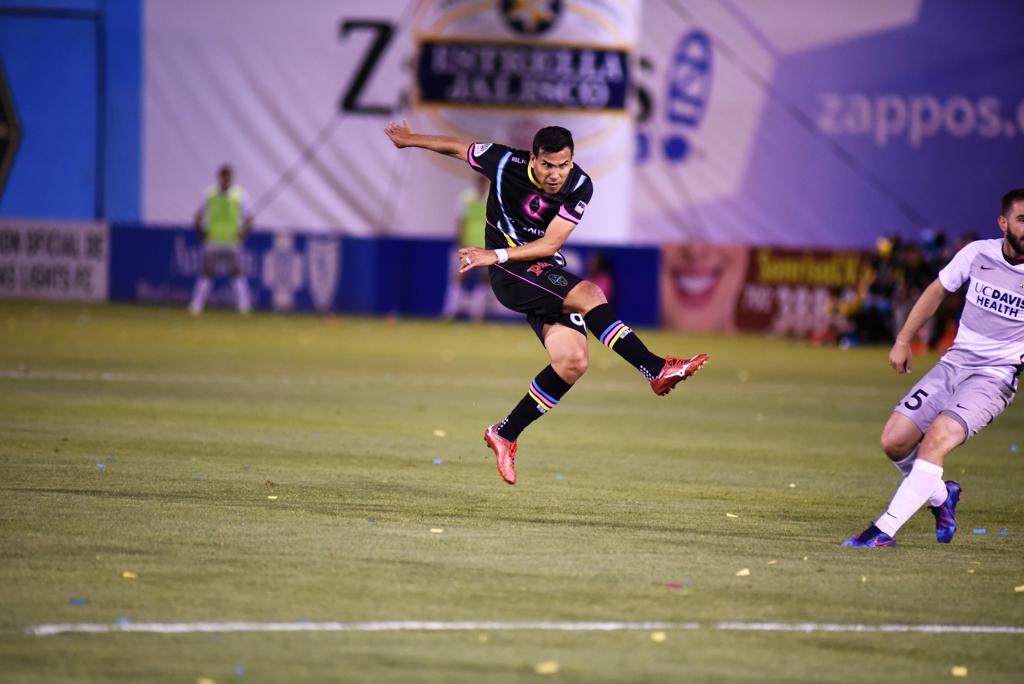 Junior Sandoval has quickly become a feature in Lights FC's Starting XI since being traded away from Memphis 901 FC to Las Vegas on April 16.

Colorado Springs is going through a rough stretch over the last month and a half, where they've gone six straight games without winning including four losses by identical scores of 2-0 and the other two being 2-2 draws.

With 3 goals each, Jordan Burt and Shane Malcolm share the scoring lead for Switchbacks FC. Meanwhile, 16-year-old Abraham Rodriguez was the goalkeeper that started their first 7 games, including in week 4 against Phoenix Rising where he became the second youngest player to be named USL Championship Player of the Week. In that match he recorded 11 saves, including stopping a penalty kick from veteran Solomon Asante.

Former U.S. Men's National Team player Steve Trittschuh has been the only head coach in Colorado Springs history, taking the reins of the team since their inaugural season in 2015. He led them to the Western Conference semifinals in their first 2 years. 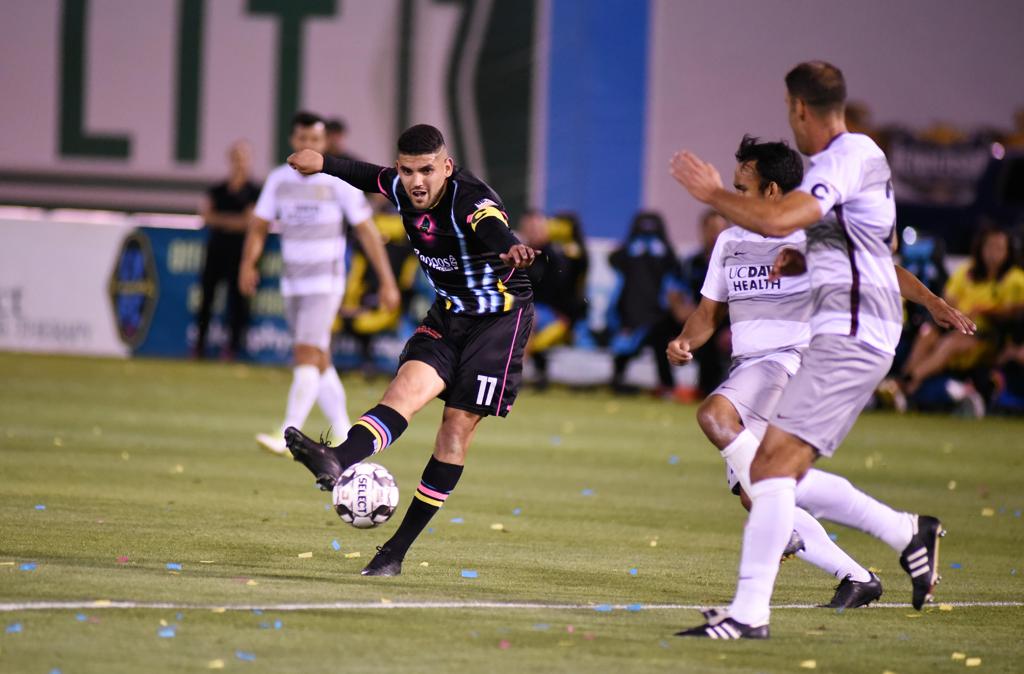 Irvin Raul Parra leads Lights FC with 5 goals and is tied with Cristhian Hernandez for a team-high 3 assists.

Lights FC didn’t get their third win at home until their seventh match at Cashman Field in 2018, this year it only took them 4 games to get to that mark. Las Vegas already matched their longest undefeated streak at Cashman Field from their inaugural year with 4 consecutive games without losing at home in the 2019 USL Championship season.

Las Vegas is one of seven USL Championship teams that remain undefeated at home in 2019. Lights FC is tied with Austin Bold FC for the highest efficiency while playing at their stadium as both have a record of 3 wins, 1 draw and no losses (83.3% efficiency).

Two of Lights FC’s most recent additions got their first chances with the team against Sacramento Republic FC. Victor Rojas and Santiago Echavarría made their debut with Las Vegas, both coming into the game as subs. Rojas is a Venezuela native who comes to Lights FC after playing for UD Sampedrense and Nogeuirense of Portugal, while Echavarria is a product of the prestigious Academy of Atletico Nacional in his native Medellin, Colombia.

At the end of the 4-2 Lights FC win over Sacramento Republic, the stat sheet only had one assist registered for Cristhian Hernandez. But those watching the match immediately noticed the impact that “Tripa” had on the pitch after being subbed in 52 minutes into the game with Las Vegas down on the score 1-0.

Hernandez changed the complexity of the action by giving Lights FC’s offense a new dimension and furthering the team’s opportunities in the final third. Over the last 4 games, where he has been used exclusively as a substitute player, “Tripa” has created a team-leading total of 13 chances in 171 minutes (the equivalent of less than 2 full matches).

In the three games since he arrived to Lights FC on April 16, Junior Sandoval has been a fixture on the team's Starting XI and has played the full match on each of them.

The Honduran scored his first goal with Las Vegas against Sacramento Republic as he fired a rocket shot from 30 yards out that found the back of the net. It ended up being voted USL Championship's Goal of the Week for week 9.

His goal was to become a professional soccer player, this past Saturday he accomplished it. Santiago Echavarria, 20-year old Colombia native, was subbed in during the second half of Lights FC’s match against Sacramento Republic. With Las Vegas up 2-1, Santiago struck the ball past the goalkeepers in the 75th minute to put the cherry on top of what was his dream debut.

While his streak without allowing a goal at Cashman Field ended at 368 minutes, Thomas Olsen continues to be solid defending Lights FC’s goal by having a pair of key saves with Sacramento’s threatening shots that he saved with the score tied.

‘TKO’ is tied for second in the league with four clean sheets, which matches the number of times Lights FC shutout their opponents in a total of 38 games in 2018. His 21 total saves have him tied for ninth best in USL Championship.

Ever since being added to Lights FC’s roster, Mobi Fehr hasn’t missed a game. He immediately won over manager Eric Wynalda’s confidence for his ability to adapt to any circumstance and being able to step in at multiple positions needed for the team, both ahead of a game and during a match.

He has been a starter in the last 8 matches, competing in every minute of the game in 7 of them.

His throw in’s have been named “the most dangerous throw-in in the USL”, undoubtedly the ball will end in Gabe’s hands every time it leaves the field in Lights FC’s final third. Robinson’s ability to power the throw-in longer than most players creates chaos in the box and elevates the possibility of his team creating a scoring opportunity.

But he has proven to be a threat not only with his throw-ins but also with set pieces. His first goal as a professional was generated from a free kick on the road against Portland, off of which he unleashed a vicious header to send the ball to the back of the net. This past weekend he scored again, this time from a corner kick that landed the ball inside the 6-yard box … where he was in the right place, at the right time to tap it in and give Las Vegas the lead against Sacramento in their win.

Parra got his second nod for USL Championship Team of the Week in the 2019 season for his performance against Sacramento Republic in Lights FC’s 4-2 triumph. Irvin tied the game up with his fifth goal of the year, and he set up a pair of scores with key passes to Santiago Echavarria and Junior Sandoval.

He’s Lights FC leading scorer (5) and is tied with Cristhian “Tripa” Hernandez with 3 assists each. Currently, there are twelve players with 5 or more goals scored in the league, while there are 24 players with at least 3 assists. Parra is one of only 3 of them that has at least 5 goals AND 3 or more assists. Irvin Raul also leads the USL Championship with a total of 34 shots taken.

Four Lights FC players have been in the team’s starting lineup for every USL Championship game in the 2019 season: Thomas Olsen, Gabe Robinson, Javan Torre, and Irvin Parra. Out of them, only Olsen and Robinson have been on the pitch for every minute the team has played.

Lights FC will host Cal FC on May 14 at Cashman Field in the Second Round of the Lamar Hunt U.S. Open Cup. Cal FC defeated FC Mulhouse Portland 5-1 in first round action on Tuesday night at Irvine, California.

Cal FC is one of the teams that Eric Wynalda coached ahead of arriving in Las Vegas. Most famously, Wynalda led them to a magnificent run all the way to the Fourth Round of the US Open Cup back in 2012. They beat a pair of professional teams that year: the Wilmington Hammerheads from the USL Pro 4-0 and afterward defeated MLS side Portland Timbers 1-0 in extra time, both on the road.

HERE IS EVERYTHING ELSE YOU NEED TO KNOW AHEAD OF SATURDAY'S MATCH VS. COLORADO SPRINGS SWITCHBACKS FC:

Saturday’s match kicks off at 7:30 p.m., start time for all Lights FC regular season matches in 2019. For on-site ticket purchase at Cashman Field, both the box office and will call open at 2:00 p.m. on gameday. Tickets are available at LightsFC.com/Tix and at every La Bonita Supermarket in Las Vegas.
** Saturday's Zappos Tailgate Party, beginning at 5:30 p.m. in the Cashman Field plaza, will feature beer specials, tailgate games for adults and kids, music, the Zappos llamas Dottie and Dollie, Lights FC merchandise, and much more.
** As part of Mother's Day Weekend celebration, Lights FC will give complimentary parking to all soccer moms that arrive at Cashman Field driving a minivan. Plus, all women's merchandise will have a 50% discount both at the team shop inside the stadium and at the Zappos Tailgate.

Saturday's game (7:30 p.m. kickoff) will be aired locally on MyLVTV with broadcasters Jeff Radcliffe and Devon Kerr announcing the action.